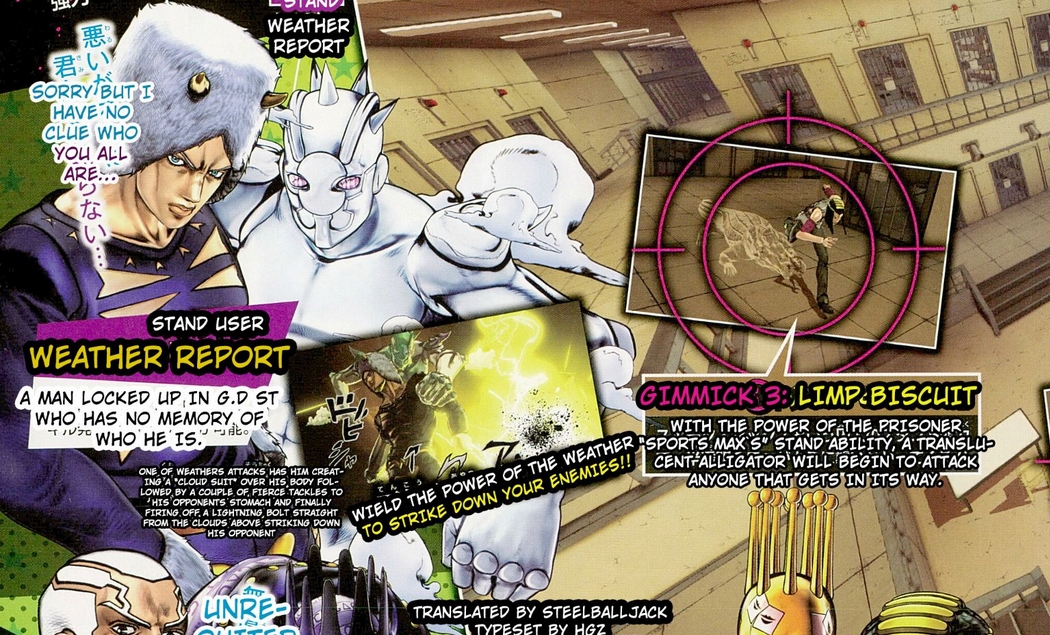 The October Issue of V-Jump provides a page of additional information concerning the previously revealed Part 4 characters as well as two full pages of brand new characters and a new stage coming to JoJo’s Bizarre Adventure: Eyes of Heaven!

Regarding Part 4 Jotaro, we learn that he will have unique pre-battle/post-battle conversations with certain characters such as his friend Noriaki Kakyouin and his future daughter from Part 6; Jolyne Kujo. Jolyne, Hermes and Pucchi also will be joining Eyes of Heaven roster along with Weather Report who will be playable for the first time in a Jojo game.

Not only are some Part 6 characters revealed but also we get a tour across the latest Part 6 stage; Green Dolphin Street. In this stage, we learn that there are three different unique stage gimmicks.
These stage gimmicks are related to stand abilities, first of all, we have the Prisoner Gess’ Stand “Goo Goo Dolls” using her ability to shrink characters (said characters will receive more damage from incoming attacks), secondly we have the young Emporio in his usual trashcan; but instead of transporting his friends to his own private room, he will teleport characters all over the stage!

Lastly we see the prisoner and killer of Hermes older Sister; Sports Max, using his stand “Limp Biscuit’s” ability where an invisible alligator will strike at anyone who comes within its proximity.

Check out the scan below!