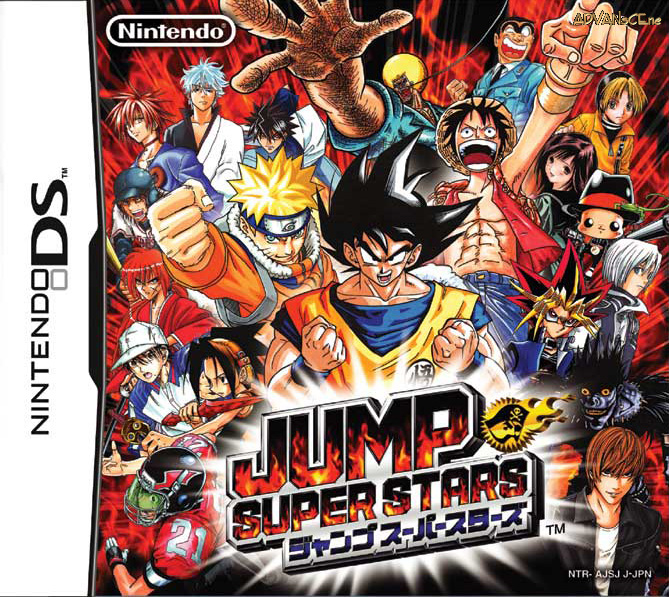 Jump Ultimate Stars was released on Nintendo DS almost eight years ago developed by Ganbarion and oversaw by Nintendo. I decided to do some digging to find old interviews or tidbits that we never knew about the game and I stumbled upon this interview.

The interview explains how this game came about and they explain a bit about the process and struggles and fears that came with this project.

There’s a good chunk that isn’t Shonen related so we will skip towards the things that relate to that. Iwata (CEO of Nintendo): Thank you all very much. Now, Nintendo’s relationship with Ganbarion dates back to when we made Jump Super Stars  Yamakura-san, could you tell me more about how that came about?

Yamakura (Director of Ganbarion): It was back in 2004, which is seven years ago now. Yamagami-san got in touch with me and said he wanted to meet me. I wondered at first why someone from SPD (Software Planning and Development) would want to see me.

Yamakura:  About twenty minutes after the meeting got started, Yamagami-san said to us: ‘We’ve actually got this project, something we want to do with Jump.

Iwata: Do you remember how all this came about, Yamagami-san? Yamagami: I do indeed. I hadn’t actually intended to broach the subject of this project at my initial meeting with Ganbarion. But as I spoke to them, the conversation kept making these incredible leaps, and I saw how knowledgeable they were about Shueisha’s Jump and sensed their deep affection for the characters. That’s when I decided to get straight to the point.

Iwata: I remember being taken back by how rapidly things had progressed during the discussion. Well, it’s serendipity – sometimes you just find the right people at the right time. When the plan for the Jump project was first raised, I remember speaking with Yamagami-san about it. We agreed that it would have to be made by someone who loved the original manga. Then twenty minutes into his meeting with Ganbarion, Yamagami-san felt confident that we had found the right people.

Yamagami: Still, Ganbarion didn’t agree to it right away. I remember returning from that meeting thinking: ‘Maybe I shouldn’t have laid all my cards on the table like that’.

Iwata: They had no idea that Nintendo were planning something like this. Yamakura: I worried about it a lot, wondering if this was a project we could agree to undertake just like that.

Hoga (Jump Stars Director): Just looking at the plans, I could tell by how fun it looked that it was bound to be a success. But at the same time, I could picture how tough it was going to be to actually put it together. Still, it was the biggest project we had ever been offered, and we felt as if fate had guided the two companies to come together. So we decided that very night that we were going to do it.

Iwata: Ganbarion was a company that had a track record in taking characters from manga and successfully putting them in action games. How did you first come to be involved in that type of game?

Yamakura: It was One Piece that got things started. I had read it in Jump and thought that it was really fun, so I went round telling everyone how great it was. Somehow, a producer at Bandai, now NAMCO BANDAI Games6, got wind of this. It turns out that right at that time, they were looking for a company to make a One Piece game. So they got in touch and said: ‘Yamakura-san, we hear you’re a fan of One Piece. How would you like to have a go at making the game?’ Iwata: So you went round telling everyone how much you liked One Piece, and someone passed on this information. It’s funny how things work out, isn’t it? Am I right in thinking that One Piece was the first action game you developed?

Yamakura: In fact, I had worked on action and shooting games for another company before setting up Ganbarion. But I only worked there for about three years, so I didn’t yet have a clear sense of whether or not I was cut out for that type of game.

Iwata: So the original One Piece project came about quite soon after Ganbarion was set up.

Yamakura: That’s right. Our first title was One Piece. We’ve been making those titles for twelve years now. It’s just coming up to thirteen years, in fact.

Iwata: How many titles have you made so far?

Yamakura: The next one will be our ninth. Iwata: Wii has a system that allows you to recommend games, which means you can tell how satisfied people who’ve played the game are with it. Games that are highly-recommended are ranked, and include two One Piece titles. When it comes to games based on manga, no matter how well-made that game might be, if fans of the original sense that it isn’t really One Piece, there’s no way that the game could get a high rating. So the fact that your games appear in this ranking is not just a question of the game being fun, but it also shows that there has been a lot of attention paid to keeping it faithful to the original manga.

Yamakura: Thank you very much. We’re always adding extra elements to the games right up to the last minute so that fans of the original will enjoy them more. This always causes a lot of trouble as we come so close to missing our deadline. But if this has led to us receiving these gold and silver recommendations, then I’m really pleased.

Iwata: So Ganbarion had experience and a solid reputation. Yamagami-san, what were your first impressions when dealing with the company?

Yamagami: For me, it wasn’t just a matter of liking One Piece. It was the fact that everyone at Ganbarion was really into Weekly Shonen Jump. Now, we thought we knew a thing or two about it, so we tried to outdo them…

Iwata: But you just couldn’t compete.

Yamagami: That’s right. They knew everything there was to know, be it about the current magazine, or its contents ten, twenty or thirty years ago. It was when I sensed this that I thought: ‘If these aren’t the people for the job, then I don’t know who is.’ Yamagami: In our team, I thought Nakano-san was the biggest Shonen Jump aficionado, but when they started talking about it, he would just say: ‘Wow! That’s amazing!’

Nakano (Works with Nintendo in the SPD): We received the design documents for the game that Ganbarion had come up with, and I saw how well-chosen the scenes were. I could tell that they really knew their stuff about each and every one of the titles, so I was confident that the game was safe in their hands.

Iwata: But the design for Jump Super Stars meant it was bound to be an incredibly demanding project. I have a clear memory of Yamagami-san saying: ‘Nakano-san can handle the pressure, so we’ll give this project to him.’

Nakano: Well, I started off very eager to work on it. But the schedule turned out to be really tight. No sooner did we get started, than we had to come up with a playable demo.

Hoga: We had to come up with a demo for Jump Festa.

Yamakura: Development got under way in the summer, and we’d come up with the demo version within three or four months. Nakano: And then we had less than a year to get the entire game completed, so it felt like we were constantly working to a weekly deadline. I’d always have these long phone calls after ten o’ clock at night, so a junior colleague near my desk used to joke: ‘Ah, I see your sweetheart’s called again’. I just remember being constantly on the phone. (laughs)

Iwata: Hoga-san, how do you think you managed to get through it all in one piece?

Hoga: Well, in our plan we were clear that we thought the player would enjoy having a lot of characters feature in the game. This plan meant we could see precisely where we’d need to apply our efforts. And then having deadlines that need to be met gives you the determination to make the decisions that need to be made.

Iwata: Without deadlines, it would have turned into a never-ending project. There’d be no limit to the touches you could have put in there for Shonen Jump fans.

Hoga: That’s right. It was the deadlines that forced us to get the job done. Yamakura: Nakano-san and Hoga were cramming more and more in, right up until the last minute. Eventually, Yamagami-san had to put his foot down and say: ‘Look, we need to cut this.’

Yamagami: That’s right. The way the project was headed was putting a lot of strain on the team, so I knew that some of the more risky features would have to be cut. It was just a question of choosing the right moment to bring this up, which is something I ended up discussing with Yamakura-san.

Nakano: What really impressed me about Ganbarion’s plan for the game was…well, you know, the manga came out weekly, and they’d naturally begun work on the game some time before, so the game, as of its launch, cannot feature material from the latest manga episodes. However, Ganbarion’s plan had a blank in the design documents where a special move should be, the idea being that they’d put in the special move from the latest edition of the manga. And this wasn’t just for a single character – it was for lots of them. I thought what Hoga-san was doing was really something. Iwata: I guess that was a method you’d developed working on all those One Piece games.

Hoga: That’s right. If you read a series week in, week out, you’ll pick up on patterns in the story…

Iwata: So you’d be able to gauge how things were developing and when a new move was going to appear.

Hoga: Yes, that’s right. So we made the game, all the while looking at the schedule and judging how long we could afford to wait before we just had to go with the material we had.

Hoga: It was. But for me, it was the obvious way to go about things, though that may have been a result of working on all those One Piece titles. Iwata: The second Jump title 10 was a step up from the first, so it must have been even tougher going.

Yamagami: Yes, it was 1.5 times the size, and we had to do it in two thirds of the time.