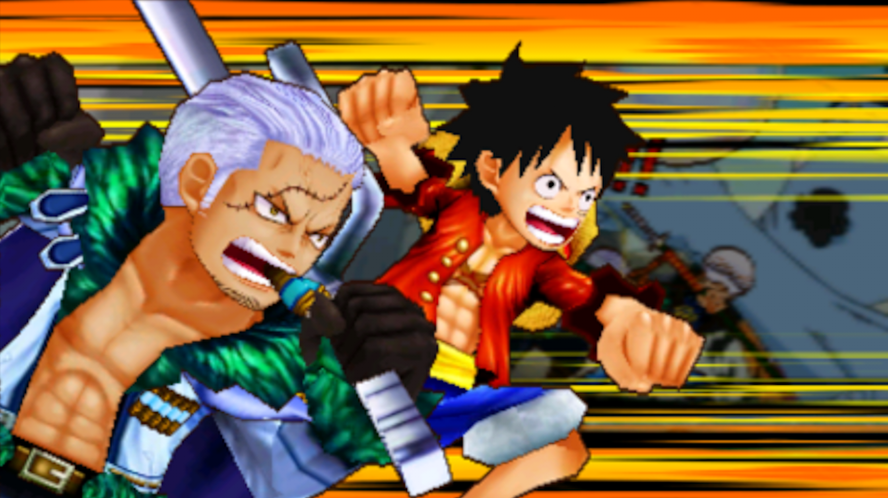 One Piece: Super Grand Battle! X is out now on the 3DS in Japan and since I have a Japanese 3DS I was able to download it and give it a go. Sadly, this game has a few rough edges that really hindered the experience for me.

Lets start from the beginning; the game starts up with a really nice original opening for the game that shows off the One Piece cast fighting in the arena. Once that’s over the game stars and you’ll find yourself at the main menu which we translated here. New World Domination mode is the game’s story mode where you literally have to dominate the field by beating sections on the map that are divided by dashed lines. You’re only able to move once space at a time and once you beat the mission requirement you will be able to advance further on the map. You’ll be able to freely move around the spaces you already have beaten and along the way you will find friends and enemies that you have to battle in order to have them join your team and take their land. Not everyone will join you however, I had some situations where they would disappear after I defeat them or they would join my team then betray me when they meet certain characters.

After you defeat the characters on the map you have cleared the level and can advance to another map. You can return to previous maps in order to dominate the other parts of the map that you haven’t reached the first time and it also gives you the option to start over on that level.

The story can change sometimes depending on who you meet with first and if you decide to let them join you or not. You may even have to replay a map to fight a certain character that may have disappeared because you choose to join with someone they don’t like. I remember Hancock was mad at me because I choose to join up with Smoker…then came back and teamed up with Sanji.

Unlocking characters is simple, all you need to do is find them on the map and battle them but again, usually you have to pick the right path if you want to unlock everyone on the map at once. Then after you unlock them you head over to the shop to buy their special attacks and desperation ultimate attacks. What I didn’t like about the story mode was that the missions were so repetitive that it bored me to tears. The maps missions always consist of K.O your opponent, K.O and collect the most points until the time runs out, coin battle and sometimes there’s special missions like in Jump Ultimate Stars where you have to open chests and get a certain item X amount of times.

After the first map, I was already tired of playing the same type of missions. Sadly you’ll need to grind through these in order to unlock your favorite characters and supports.

The game boasts that there are over 85 characters and only 37 are actually playable. Now I’m not sure whether I should say this is a bad thing because we all have to realize that this game started from the ground up so all the models, animations and more most likely took up a lot of time.

Some of you may remember that Jump Super Stars had a very small character roster because they had to start from the ground up as well, then Jump Ultimate Stars arrived later on and they used the first game as reference so that there would be more time to add more characters and movesets.

The game has a lot of interesting support characters like Big Mom, Going Merry, Gold Rodger and more. There are 86 support characters (including the characters that are playable in the game) so they weren’t really wrong to say that the game had over 85 characters. A lot of these supports work really well with performing combos.

Speaking of combos, a lot of the characters combos are as smooth as butter. For a lot of characters, you’ll have a decent amount of leg room to pull off some great combos using support or the tag team system.

Overall this game isn’t really bad, but the story mode can potentially turn a lot of people off. Even if you unlock the character you want, you have to buy their secondary special move and desperation ultimate which for certain characters can cost as high as 10,000 Beri each.