During the Nisekoi stage event at Jump Festa 2015, Nisekoi’s second season was announced to premiere Spring 2015 along with other popular anime such as Gintama & Food Wars: Shokugeki no Souma. It was also revealed that Sakura Ayane will be the voice actor of Haru Onodera, Kosaki Onodera’s younger sister.

Among the various booths throughout Jump Festa, Konami took this chance to showcase their newest title for the PSVita: “Nisekoi Yomeiri!?”. In Yomeiri you take on the role of Ichijou Raku, the son of a leader in the yakuza faction Shuei-Gumi, who doesn’t have the best of luck with women. We’ve taken the time to translate well over an hour of gameplay for Nisekoi fans. You can watch the translated story mode below:

Nisekoi Yomeiri!? can be purchased here 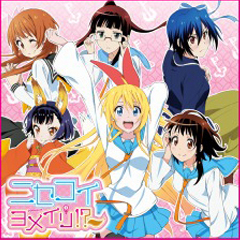