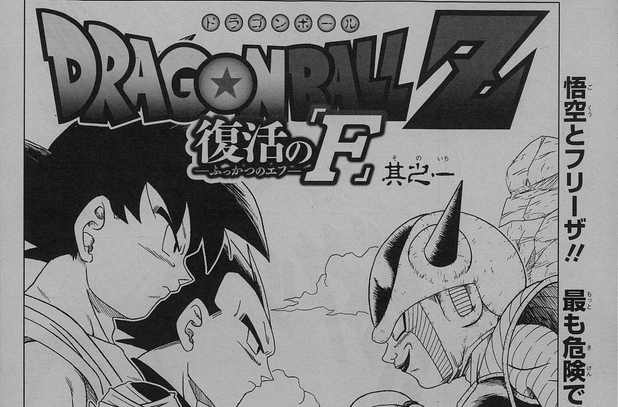 This months V-Jump magazine contains the first chapter of the Dragon Ball Z: Revival of “F” manga and we have the summary for you right here to enjoy. The first chapter explains how Frieza is revived in detail and how he vows to defeat Goku after four months of training.

The manga starts off with a small flashback of Goku turning into a Super Saiyan in front of Frieza which then transitions to Frieza being defeated by Future Trunks. He quickly wakes up from those flashback dreams and appears to be in hell and wrapped in a cocoon.

As this happens, Sorbet, who seems to be in charge of Frieza’s forces is upset that his men have been defeated on Namek. Sorbet sends one of his best men, named “Tagoma” (Tamago which means Egg) to Earth so Frieza can be revived.

It turns out Shenron is summoned by Pilaf! As this happens Sorbet jumps in and says “I want you to revive Frieza!!”. Shenron then announces that it is possible to revive Frieza but his body has been scattered so his souls cannot return.

Sorbet says that he wants the body to return and so Shenlon grants his wish. This is where Friezas body disappears from his cocoon in hell and appears in pieces around Sorbet. Meanwhile Piccolo and Gohan can feel his Ki.

Sorbet and Tagoma gather the pieces of Frieza and Sorbet announces that he plans to revive the Freiza army. He then begins to revive Frieza in a revival chamber. As this happens, Frieza begins to remember his battle against Goku on Namek.

Frieza is now revived and arrives in his original form as he begins to kill off some of his underlings and said that “my powers have weakened after being revived. Now it’s time for some revenge”.

Tagoma explains to Frieza that he should just ignore Goku and the others. Check Coles Catalogue and Woolworths Catalogue. Hearing this angers Frieza as he blasts Tagoma and sending him out into space. Frieza learns that Goku has become stronger since his death and said to himself that he will also get stronger.

Frieza also learned that Goku defeated Majin Buu and later data was not collected on Goku and the others. He remembers that the two people he shouldn’t touch are Beerus and Majin Buu.

Frieza then said that he still has power yet to be shown and that it would only take just 4 months to train to defeat Goku in the blink of an eye.

Thanks SteelBallJack for the translations.