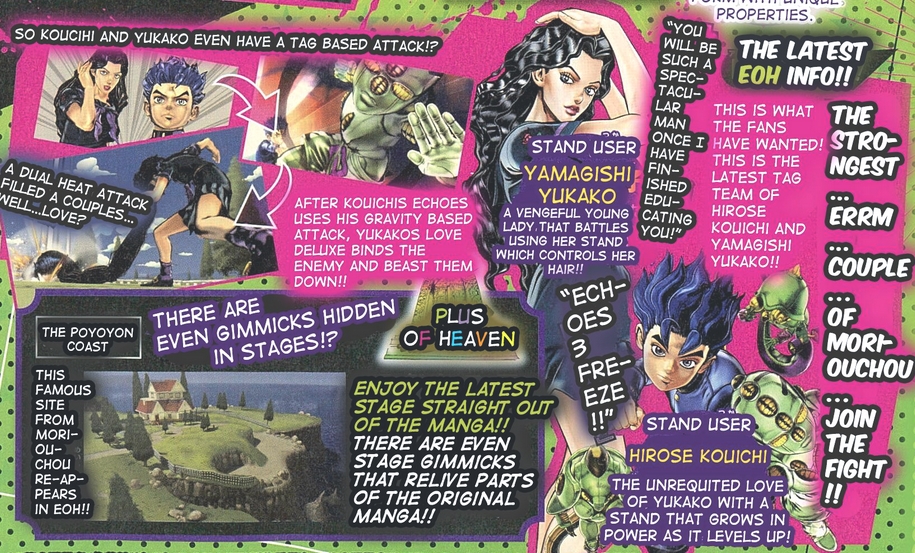 JoJos Bizarre Adventure: Eyes of Heaven Adds Kouichi and Yukako to The Roster

Eyes of Heaven scans are rare, but when they arrive they bring gold!! In the latest scan straight from VJump, we gain two new characters straight from Part 4 Diamonds are Unbreakable; Hirose Kouichi and Yukako Yamagishi. Kouichi was a playable character in All Star Battle but Yukako will be playable for the very first time in a JoJo game!

We also see a new stage called Poyoyon Coast named after an area in Moriouchou where a girl jumped off a cliff and was thrown back onto it due to the power of Kouichi’s stand; Echoes.

Addtionally, there are new characters who are not confirmed as of yet but are featured in the center screenshot which are both Jean Pierre Polnareff and Hol Horse from Stardust Crusaders!!

JoJo’s Bizarre Adventure: Eyes of Heaven will release on both PS3 and PS4 sometime in 2015. You can pre-order over at Play-Asia once they become available.