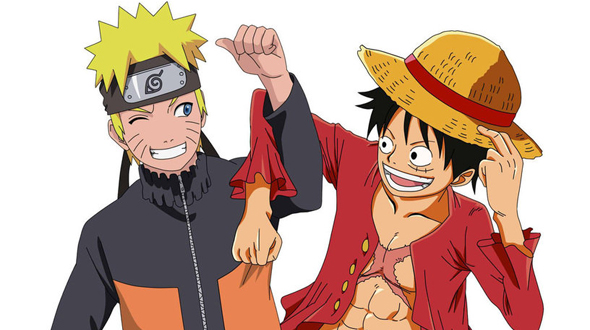 The Naruto Exhibition only book titled Michi contained some information on both Kishimoto and Oda as they went along with their own manga series. Kishimoto and Oda talk about their inspirations, struggles and even jealously.

1) The Camouflage Technique Kishimoto used in Naruto Chapter #241 influenced the way Oda drew the cloaking effect for the Clear-Clear Fruit.

2) Kishimoto always had Naruto returning to the village to differentiate from One Piece’s always roaming adventure.

3) Kishimoto decided that Naruto should have his companions around in the beginning whereas Luffy made friends as he went on his travels.

4) Both Kishimoto and Oda made attempts to not duplicate each other. For example, even when they both drew similar techniques like Luffy’s Gum-Gum Giant Pistol and Choji’s Partial Multi-Size Technique.

5) Oda spoke to Kishimoto before giving Luffy his “Giant Pistol” technique after seeing a scene where Choji’s hand got big. He told Kishimoto “Hey, I’m copying your style here. Sorry.” Kishimoto was fine with this though.

6) Sanji’s name was originally supposed to be Naruto, but Oda changed it when he found out the Naruto manga was releasing. Kishimoto said that if Oda would have kept that name, he probably would have changed Naruto’s name to other ramen words like “Menma” or “Shinachiku”.

7) Oda’s favorite characters are Rock Lee and Might Guy. Kishimoto was inspired by the Jackie Chan movies he used to watch.

8) Oda’s favorite character was also Zabuza and during the Land of Waves Arc, Kishimoto said he was getting a fever nearly every week when drawing that arc, but he said he had to keep going.

9) Kishimoto’s most difficult period was doing the final chapter in color. He also felt that he was running out of space to wrap things up. Check Ralphs Ad and Fry’s Ad. He usually would carry the story onto the next issue, but this time he couldn’t do it.

10) Oda would like to end One Piece on a nice and happy note, but getting to that point is going to be very difficult.

11) Kishimoto would like to work on something related to science fiction. Possibly something that has to do with clouds and the sky. Kishimoto was very jealous when Oda made the Skypiea Saga, it was something he wanted to do first, but was beaten to it.