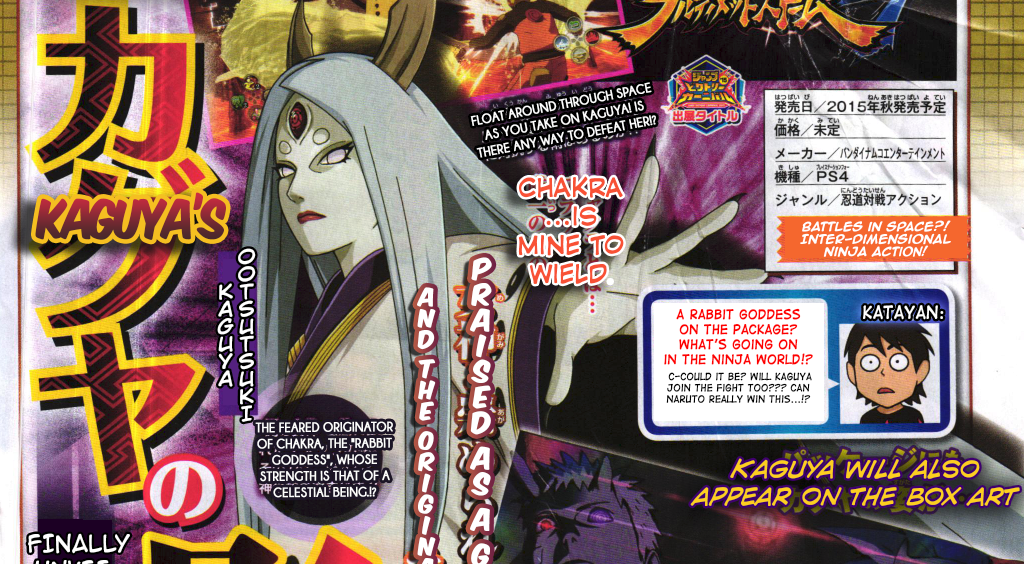 The latest issue of Weekly Shonen Jump has revealed that Kaguya Otsutsuki, the originator of chakra and the mother of none other than Hagoromo, The Sage of the Six Paths, will be joining the upcoming anime fighting game Naruto Shippuden: Ultimate Ninja Storm 4.  Additionally, the scan also reveals that Boruto, the son of Naruto, and Sarada, The daughter of Sasuke, will be joining as playable characters well. Not only that, but they will also have their own combination jutsu.

As for Naruto: The Last, the scan reveals that Naruto and Sasuke will be playable, but Kakashi, Hinata and Sakura will be alternate costumes. Finally, the temporary box art of the game is revealed, and it features Naruto, Sasuke, Obito, Madara and soon it will show Kaguya.

UPDATE: Kana-Boon will be making the song for the game’s intro cinematic. They also wrote and performed the opening for Boruto: Naruto The Movie. Their song “Spiral” will be the last opening song in the Storm franchise.

Naruto Shippuden: Ultimate Ninja Storm 4 will be releasing on PlayStation 4, Xbox One and PC this fall. Check out the scan below: