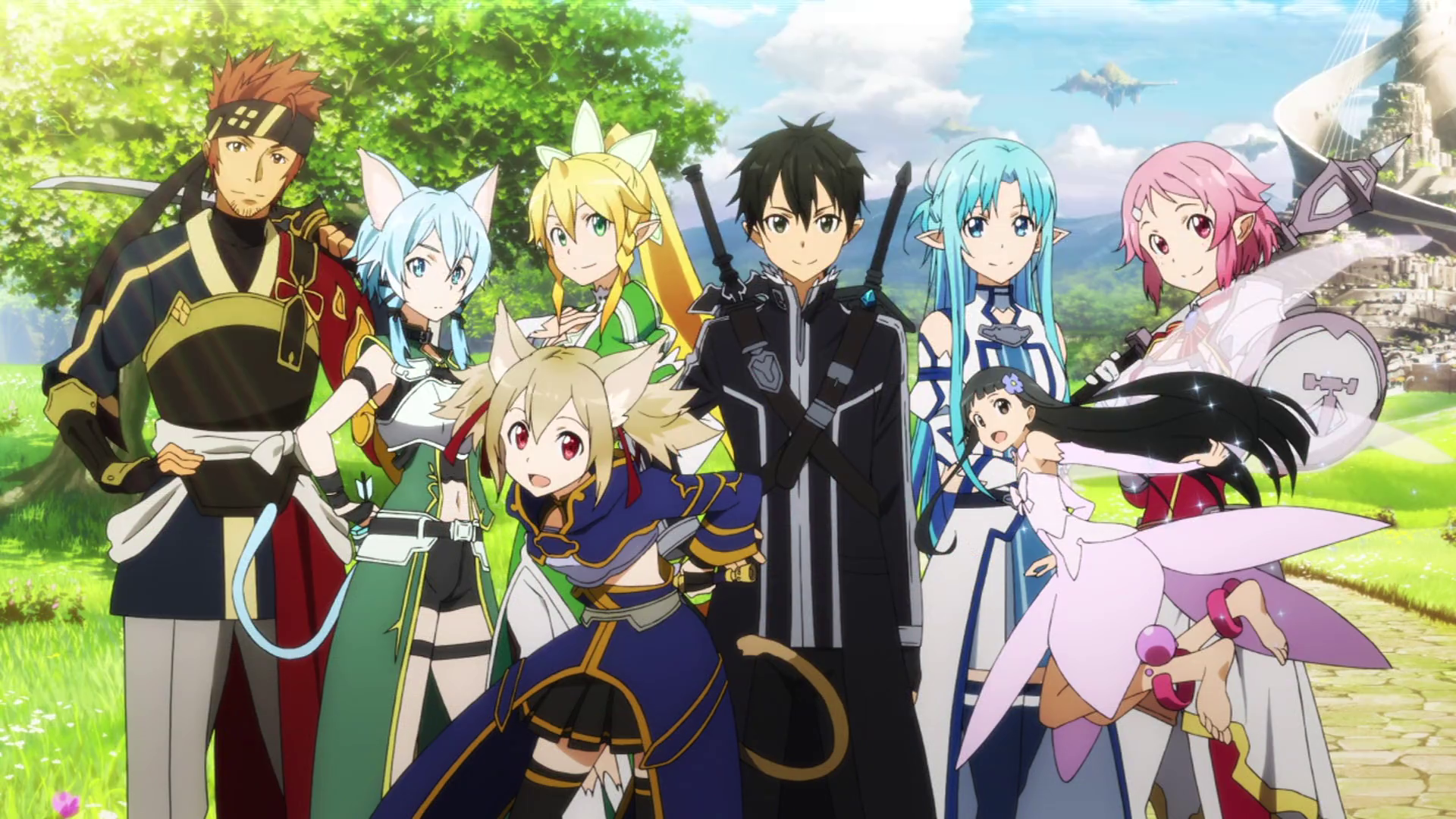 Review: Sword Art Online Re: Hollow Fragment – Not So Hollow

Sword Art Online as an anime is very hit and miss for the fans. There are some that absolutely love it, and some who absolutely hate it, however the general thought of a game like SAO existing in real life drives most fans up a wall, in a good way.

Being able to enter into a virtual world as real as the one in Sword Art Online is a dream of many gamers, even non-anime fans, and Sword Art Online: Hollow Fragment tries to bring you into that feeling more than any game has before, does it do a good job? Hopefully this review answers that question.

Sword Art Online is an anime that revolves around Kazuto Kirigaya, better known by his online name as Kirito. Kirito is an intense gamer who plays tons of VRMMO’s and served as a beta tester for the latest and greatest, Sword Art Online. He gets stuck in the game (along with everyone else) because the creator of the game decided to implement a system that makes it so if they die in game, they die in real life.

This game includes the Infinity Moment storyline so that you can be up to date with the workings of this world, since it doesn’t exactly follow the anime completely. Parts of the story are shifted around and even completely changed, with new characters introduced way earlier than they would be in the anime timeline.

So let’s do things the way I always do, by covering three major good points, and 3 points where the game didn’t quite match up with other games in the same genre.

When you boot up the game, the first thing you’ll see is a Login screen that is very reminiscent of the anime login. You’ll watch a cut-scene and then you’ll have to make your character. The character customization isn’t as deep as a few other games, however it gets the job done.

You’ll be able to customize your character’s hair, gender, skin tone, voice, and a range of other things to get your character to look the way you’d like them to. When you pick a name, you can pick something serious like “Gilgamesh” or just go with something silly like I did by naming my character “Dip Ripples”. It really is up to you, and in a game where you’ll be seeing a lot of your main character (since you can only play with your character, more on that later) its important to get a look that you like.

So you get past the character creation, and now there’s a whole game that you have to play. That’s the important part right? How is the game? Well first i’ll touch on gameplay.

When I started playing, I honestly wasn’t a huge fan of the combat system. Having to give commands to the second character, having to switch or perform certain commands to get your meter back and make your attacks a bit more viable, it all felt pretty contrived. As I progressed through the game, I started to get the hang of the system, and even without the use of new skills that I was acquiring, I started to have fun testing out new combinations against bosses, and setting up different parties with various characters and my Dip Ripples.

The has a skill system that lets you learn tons of passive and active skills. Anything from healing, to defense bulking, to faster attacking can be equipped onto your D-Pad, but the most interesting skills are the attack skills. Using a Sword Skill against a boss and seeing your team mate line up and keep it going into a combo is pretty awesome, and even though a few of the original sword skills that you get look pretty lack luster, you’ll find that there are a few that really give you the flash for your cash that you’re looking for.

Now for the story. This is, one of the slightly complicated aspects of this game, since this game is sort of two games in one. One side of the game is all about floor clearing. You’ll clear floors 75 – 100 in a pursuit to end the game of life and death that everyone is stuck in, but that gets confusing (for fans of the anime atleast) when you see mentions to Alfheim Online and various other story arcs.

This is the more traditional side of the game. You go through different areas outside of the central town of the floor you’re on, and you find a labyrinth. This labyrinth has a few strong monsters, and usually floors have a mid-boss for you to find and defeat for a cool bonus. Once you get to the end of the labyrinth, you’ll find the boss room, and you’ll have the choice between sticking around, or heading back to town in order to do the planning needed to take the boss on.

There’s a quest system in place for those who like to extend the game even farther than just clearing floors and taking names, and this comes to play before each boss fight. You can complete certain quests to get information on the boss, and make it easier to defeat it. As you head towards the center of the city, you’ll have to decide on which party member you want for the actual battle. This is important, as they each have levels, strengths, and weaknesses that need to be thought of when going up against the boss.

The safest character to add to your party is Asuna due to her high level, however you can take other characters out and grind their levels up o that they’re up to task. This game has tons of areas for you to grind, and even more when you unlock the upper floors, so for those who enjoy the grind that tends to come with RPG’s, you’ll get it, and for those that don’t, the game does a good job at giving you reasonable options that’ll let you just keep advancing.

The second part of this game is the Hollow Area storyline. Kirito meets with a mysterious girl named Philia in a hidden environment in the game that not even his friends can teleport to. This area allows you to jump on with friends in multiplayer, and includes tons of new enemies, items, and quests.

It differs from the floor clearing segments, however there are still bosses to face, along with a great narrative driven behind the mystery of the new character, and her dark origins. Its hard to get into it without spoiling anything, however you’ll find that the story between Philia and Kirito is a rather deep one, and doesn’t feel “Hollow” at all. You’ll travel across different areas unlocking the secrets of a dark guild out to kill players, and you may even get lost in the darkness, make sure to spend lots of time during this segment of the game, since it is easily the most enjoyable.

Most importantly, this is the part of the game that is supposed to be worth the money. Instead of feeling like a new game, this part really just feels like a giant add on to the last title, however due to the cutscenes and really well developed story arc, you really do get deeply entrenched into the story.

Now its time for the bad. Honestly, there isn’t all that much to say. There are a few things that I personally didn’t enjoy, so i’ll list those below.

First of all, graphics. Yes, in 2015 this is a topic that is all too important to many gamers, and while this game does a great job at making the characters and enemies look pretty good, the environments will stick out to you as upscaled Vita  environments. Some textures don’t look all that great, and it just seems like there wasn’t too much work done to get the game to look like a PS4 game should look like.

Secondly, the story is told though character arts and text boxes, and these go on longer than I’m used to. Scenes will go on for long extended periods of time, and it took me a while to realize that I could just skip them with the L1 button. Check Australia Post Catalogue and Jaycar Catalogue. This is a shame, because there’s a lot of important story related stuff, but the game has tons of moments that are just pointless. I’m sure some of this stuff is in there just for relationship building with the characters and laughs (one specific scene where Klein catches rare meat, and everyone talks about how much they want his meat was pretty hilarious), but a lot of it is sort of just “Kirito is so amazing, hey lets gather around and talk about Kirito”. Thankfully, these interactions are fully voiced, so if you are into whats happening, you atleast get an audio representation of what’s happening, even if it is in Japanese.

Finally, the inclusion of Infinity Moment into this game felt like a cop out. This game costs $40, and its a shame that a good half of its content comes from a game that was already released on the PSP. For fans that haven’t had a chance to play Infinity Moment, this is actually a great deal, but for those who keep up with the game series, this is sort of just one of those situations where we feel like more time should have been spent expanding the “Hollow Area” storyline, instead of trying to fluff up the game with older content (even though there are a few updates to the older story involving newer characters)

This all comes together to make a game that’s very similar to the anime in terms of fan feedback. One one hand, the game is pretty solid and holds up well against other games in the same genre, but on the other hand there aren’t many pseudo-mmo games on the market these days. On one hand, you get to live out an enhanced version of the anime story-line, and you can even have fun with the built in dating sim that they include with the game, however on the other hand it feels like there should be a bit more story for those who’ve already experienced Bandai’s previous outing with Infinity Moment.

Overall though, the game delivers for fans and non-fans alike, and serves as a solid RPG for the PS4. With Sword Art Online: Lost Song on the way, this game serves as a great starting course, and we’re looking forward to see what’s next.

Overall though, the game delivers for fans and non-fans alike, and serves as a solid RPG for the PS4. With Sword Art Online: Lost Song on the way, this game serves as a great starting course, and we’re looking forward to see what’s next.