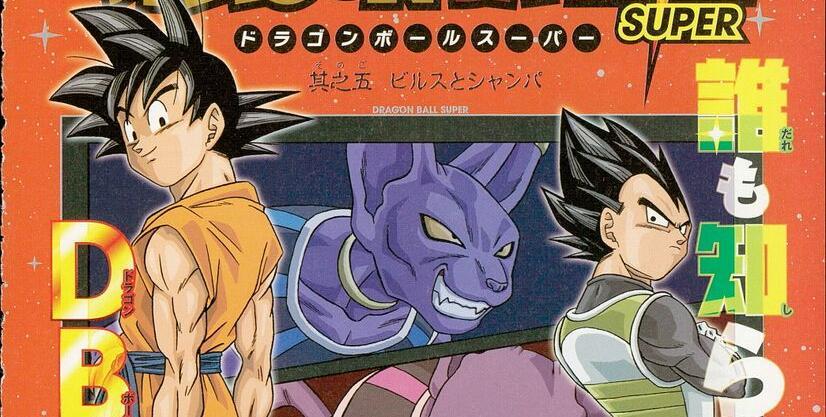 The latest news for the V-Jump spoilers are finally here! For quite some time we’ve been getting a lot of recap chapters with little bits of new information, but surprisingly this chapter gives us a great amount of new content to read and it is AFTER the battle with Golden Frieza.

Thanks to SteelBallJack, the translation reveals various things such as the SSGSS new name (at least what the manga calls it), we have the name for Female Whis, Beerus relationship with Champa and more.

Goku: “I’m gonna get much stronger so I can battle against some really tough guys!! ”

Vegeta: “Hmph, there’s already a stronger guy and he’s right here!! You can keep prattling on like that only once you’ve defeated me!!”

Vegeta: “The person who will defeat Beerus-sama first… will be me!” “Like I’ll let you overcome me as always!”

Page 89: (Vegeta is having a hard time keeping up with Goku)

Whis: “He’s not faring well is he. Vegeta-san’s mind is still in disarray.”

Page 91: (Vegeta does a surprise blast and goes SSGSS)

Vegeta: “Hahaha, exactly what I wanted!” “Even though we are both SSGSS, the great elite SSGSS Vegeta will always come up on top!!”

Whis: “Oh and speaking of, remember how I told you that going Super Saiyan was prohibited in this training. If you are not going to follow the rules then it’s going to get problematic.”

“Do you feel that you can act like that just because you defeated Golden Frieza?”

Narrator: “A little while before this story; Frieza, known as the Emperor of Fear who shook the whole universe with his mere presence, headed to Earth to take his revenge upon Goku.”

“But as this was happening Goku and Vegeta were receiving training from Beerus and Whis and managed to reach a new level of Super Saiyan even above God now known as Super Saiyan Blue.”

“And finally they defeated the revived Frieza once and for all.”

Whis: “This is a little punishment for breaking our former promise.” “From now on you`ll be battling in this extremely heavy suits.”

Goku: “Eurgh.. This is all your fault, Vegeta!”

Champa: “Who are those two? Your new students or something?

Whis: “If it isn’t Champa-sama. Now this is indeed a rare sight. ”

Vegeta: “Look, he looks an awful lot like Beerus-sama!”

Goku: “There’s even a woman that looks similar to Whis too…”

Whis: “What may I assist you with?”

Champa: “Call Beerus for me, will ya?”

Female Whis: “How rude of you. This is Beerus-sama’s Twin Brother, Champa-sama.”

Vados: “Watch your tongue. Champa-sama is the 6th Universes God of Destruction.”

Goku: “Hey, so which of you is stronger, you or Beerus-sama?”

Vados: “You cannot ask such a question!” “Just by looking at Physique alone should answer your question.”

“Oh and by the by, me and Whis are also brother and sister.” “Although I have to say that if you wish to compare our strengths, I would be a little bit stronger than my brother.”

Goku: “Woah this is crazy! We`ve found people who are much stronger than us!”

Vegeta: “Why do you look so happy about that…”

Whis: “Sister, I must object. I’ve been training for more than a Thousand years prior.”

Vados: “Hehehe, then shall we find out who truly is the strongest?”

Beerus: “What the hell do you two want? You just wanted to talk about who’s stronger?”

Champa: “Haha Beerus, it’s been a while huh.” “Get ready, it’s time for our usual showdown.”

Champa: “Try this recent delicacy I found. It’s a boiled egg from a Don Don Bird. It is so tasty that there are no words that could be said to explain its deliciousness!”

Goku: “Oh… when he meant Showdown he meant a Food Showdown, right?”

Whis: “Indeed. Every time Champa-sama comes to visit it’s always like this.”

Goku: “Seriously? I was looking forward to seeing Beerus-sama go all out against someone as strong.”

Champa: “What do ya think? Crazy delicious right! The 6th Universe really is heaven when it comes to our food!”

Beerus: “Hehehe.. alright I get it, now shut up and try my choice Champa.” “Hehehe, so how is it?”

Beerus: “You say that but you even and drunk all the soup!”

Champa: “Beerus… where did you get your hands on this?”

Beerus: “Not only that but Earth has an infinite number of delicacies that grow by the day!”

Vegeta: “What exactly do you mean by “The 6th Universe”?”

Whis: “Oh don’t you know? There are 12 different universes, we are on the 7th Universe.”

Goku: “I think I’ve heard that before…”

Whis: “As mentioned Champa-sama is from the 6th universe and the 6th and 7th universes are somewhat like Twins.”

“Or you could treat it as the front and back. For example, the 1st and 12th Universes or the 2nd and 11th Universes. Basically the related universes number will always add up to 13, that’s another way you can tell which universes are twin universes.”

Goku: “I don’t quite understand, could you explain it one more time?”

Vados: “I’ve found it Champa-sama. There is indeed an Earth on the 6th Universe.”

Vegeta: “What did you say?” “There’s even an Earth in your universe?”

Vad0s: “Although.. I’m afraid to say that this Earth was devastated by war and there seems to be no sign of Humanity on that Earth.”

Beerus: “Hahaha, Unlucky eh, Champa!” “There are no humans in your universe that can serve up some of this delicious food!”

Vegeta: “Don’t bring up the past!”

Beerus: “What, you want to do battle?” “What do you mean battle?”

Beerus: “Hahaha, you want to fight me?”

Champa: “No no no, We will choose humans to fight for us from our own Earths.” “…yeah, how about a 5 man group battle?”

“It’ll be 1 Vs.1 until we have a clear final champion!” “Let the 6th & 7th God of Destruction Battle Tournament begin!”