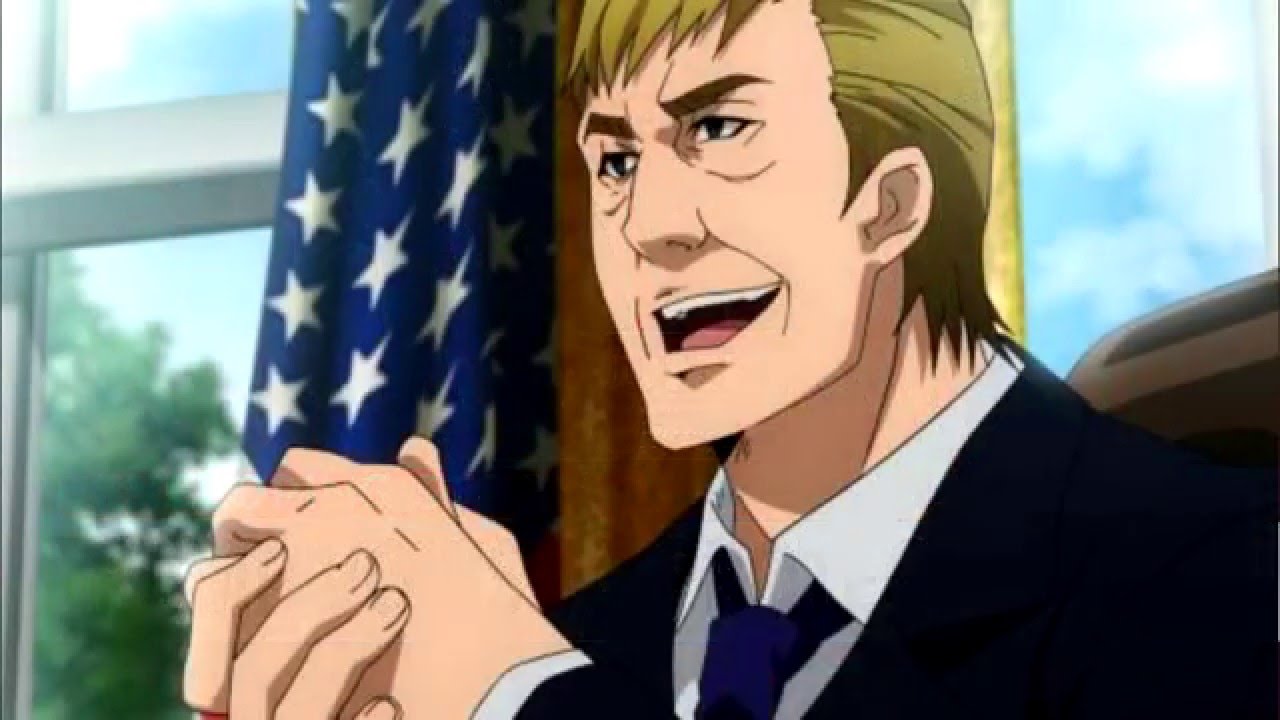 “Attack On Liar”, Donald Trump Illustrated As A Mad Titan In A Popular Tokyo Newspaper

Donald Trump (more affectionately known as “The Donald”, but recently known as “Short-Fingered Vulgarian”) is a name that I’m sure most of our readers would never expect to see written in an article on this website. I mean, we cover Japanese anime and gaming media, so you’d think that American politics would be something that we’d never quite get to talk about in these parts; however it looks like one Tokyo newspaper is giving us an opportunity to do just that, due to a comic found in their latest print.

The illustration, which apparently ran in the Chunichi Shinbun newspaper depicts Donald Trump as a large “Titan”, strolling past that other large wall that you may have heard of.

He’s built a wall in Mexico, and now he’s come to destroy the wall in Asia!”

The two characters below the Donald Trump ego sized titan share a conversation about Mr. Trump:

If he actually becomes their president, we’re screwed! – Man 1
What are you talking about? The Asian titans will protect us! – Man 2

Now let’s break that down for those that may not be all that familiar with the concept of “Titans” and walls in Japanese pop culture. A titan is a large humanoid creature that can vary in size, and roams the world eating every human that it comes into contact with. These titans have no actual need to eat, as they don’t get hungry, regardless, they maliciously eat humans  in order to satisfy some sort of cruel urge that they have inside.

This comes from the popular Anime and Manga, Attack on Titan (Shingeki no Kyojin), where our heroes battle against these large forces of nature after a large titan tears down the walls of the largest city on earth. This allows other, smaller titans to flood into the city and eat large portions of the population.

Now if we look at it at face value, Masaaki Sato (the illustrator) is putting forward the narrative that Donald Trump is, much like a titan, attempting to tear down “the wall” of society to let the “smaller titans” get in and eat innocent people. We’ve seen how Trump has gone off on rants both for and against the establishment to prove how much of a wild card he is, and that strategy has been widely successful, winning him primaries in almost every state that has voted so far, and giving him an almost clear path to the republican nomination.

We’ve also seen how Trump enables his followers to do damage to the people that disagree with him. With violence at protests, death threats, and even his promise to pay for the legal fees of anyone facing trouble due to attacking a protester at a Trump event (a statement that he’s recently backpedaled on). So I’m sure you can see the parallels between Mr. Trump and a titan, however one of the final lines in the comic might make you think that there’s some sort of hope at the end of this story.

Well, no. If you’re familiar with Attack on Titan, you know that our author doesn’t believe in happy endings. The events that take place within the pages of the manga are sometimes hard to accept, and more often than not, the “good” side doesn’t exactly win unscathed. The last line about the “Asian Titans protecting” the citizens really feels like an empty promise, due in large part to the fact that in the manga, the only special titans minus our hero are other’s trying to tear everything down for their own agenda.

One lone titan backed by hundreds of regular people stands against the oncoming assault, and when the time comes for the general election, that may actually turn out to be similar to what we’re facing at the ballot box. So I challenge our readers of voting age to think long and hard about the choices that’ll be presented to them within the coming months, as your vote’ll likely come down to a choice between two different kinds of titans, and unfortunately, you might have to choose between the lesser of two evils. Choose wisely.

Well, that was a long interpretation of a 2 panel newspaper comic. If you have any opinions on the political cycle this time around, try to keep things reasonable as you discuss them below with your fellow readers. If you’d like more of this sort of thing, let us know! We read every comment posted to the website and take what your feedback under consideration for all future changes!