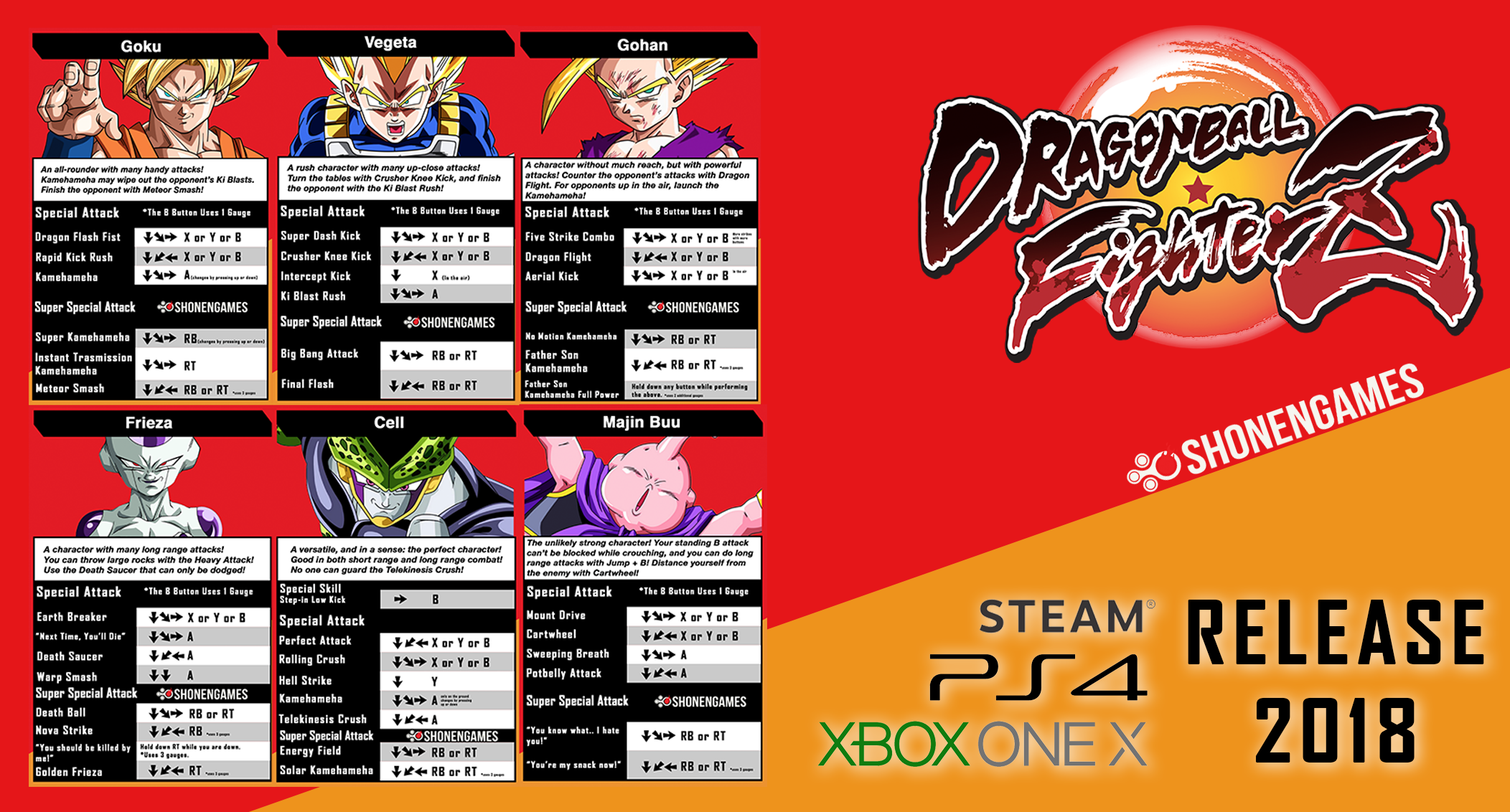 Fighting fans have been hungry for more Dragon Ball FighterZ info, and we have the fresh scoop!

Below are some images that show the in-booth movesets of the 6 characters available on the E3 show floor and the general controls for Dragon Ball FighterZ! The images are recreations of pictures taken from the Bandai Namco E3 Booth. Feel free to save the individual photos or the large one so you can practice once the beta drops later on!

Goku has a pretty well rounded moveset that seems to be based around fast attacks and his signature Kamehameha move! With Kamehameha he’ll be able to overpower an enemy’s Ki blasts, and if you’re smart you’ll be able to work it into combos for devastating effects.

Vegeta is all about rushing down your enemy. Whether you’re using his Super Dash Kick, Ki Blast Rush, or his Intercept Kick, he’s definitely ready to get all up in your opponent’s face with a rain of physical blows, so that you can hopefully set up a sweet Big Bang Attack to put your enemy in the dirt.

Teen Gohan is a younger and smaller character, so he doesn’t have the reach that Goku or Vegeta does, however he definitely has the power. Teen Gohan is a powerhouse, and his small size makes it easier for him to counter his opponents. Catch your opponent off guard and end them with the combined power of the Father Son Kamehameha!

Frieza is very Ki based. Most of his attacks utilize Ki in one way or another, whether its his Death Ball, unblockable Death Saucer, or his Warp Smash, be sure to keep an eye out for Frieza’s tricks, especially since Frieza can transform into Golden Frieza for a great Stat Boost!

Perfect Cell being called Perfect in his description isn’t for nothing. He’s very comfortable at close and long range. With attacks that’ll reach your enemy at basically all ranges, feel free to toy with them until you can let off a devastating Solar Kamehameha.

Majin Buu seems to be playful, but as a character he’s very dangerous. With moves that’ll stun you and the ability to follow up on those moves with Sweeping Breath and Mount Drive, he’s sure to be a tricky one to fight.