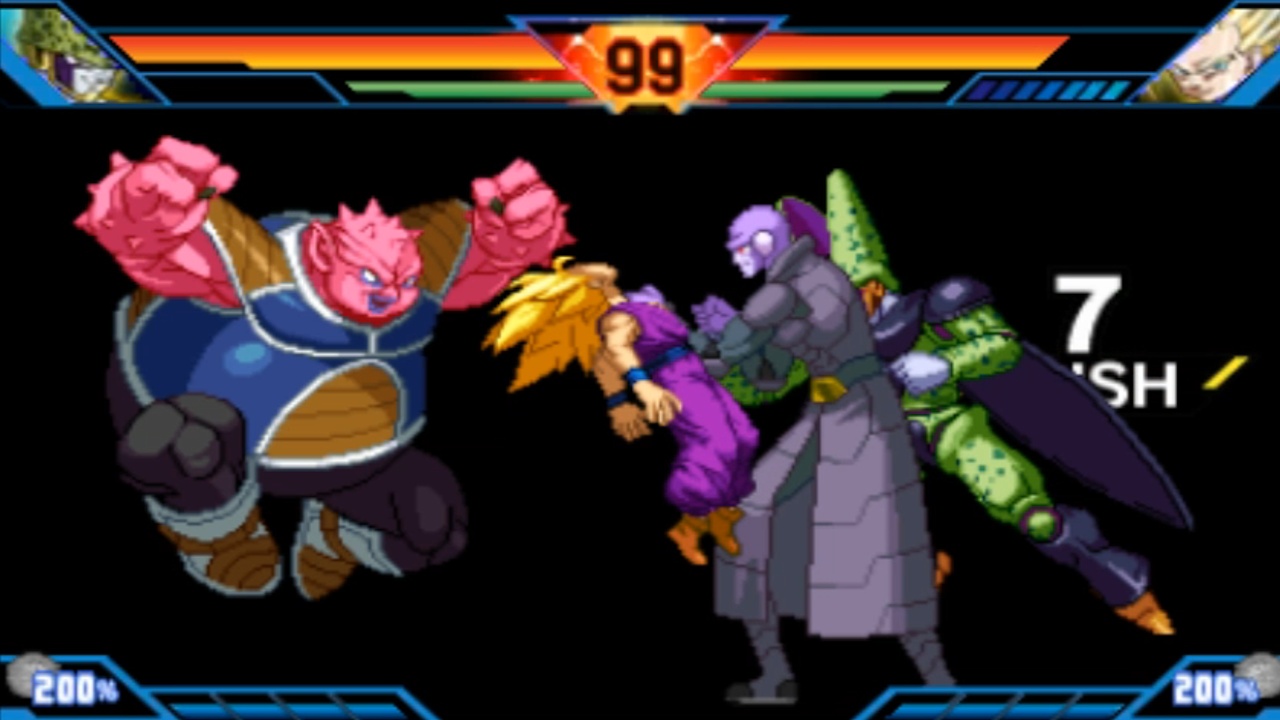 For the longest time, I had little interest in playing Dragonball Z: Extreme Butoden for the 3DS. However, after putting out a My Hero Academia: Battle for All combo video, and in anticipation for Dragon Ball FighterZ, I decided to try Extreme Butoden out.

There are several ways to form a team in the game, but for the purpose of consistency as well as for displaying the strengths and weaknesses of each individual playable character, I decided to pair one playable character with four support characters.

Note that most of these combos are not possible in an actual battle since no one starts the game with 150% meter. However, unlike some other combo videos, the one that I made for this game actually set the training dummy to recover from combos whenever possible. Most of these combos actually damage the opponent 50% and sometimes even cause a full 100% damage.

The goal was to perform combo-to-ultimate attacks for each character, but unfortunately, that isn’t possible with every character, so for some, I had to settle with their weaker special attacks. Every character has a standard wall-bounce combo with YYYYY. Following that, I could dash behind or attack and use the two best support characters in the game: Hit and Mira. When used one after the other, they stun the opponent and allow for another move or combo to be performed, which usually leads into an ultimate attack, which can only be performed as a combo of YYYYXA.

The best moves to combo with are ones with bounces or several hits in place. Kid Buu is a good example of a character who uses both of those things plus, his air grabs. But sometimes, that doesn’t work out so well.

I tried varying the support characters as much as possible, but Hit and Mira were almost always necessary to get the best combos. Hirudegarn, Spopovich, Dodoria, and Frieza’s second form are also good support characters who are commonly used in the video.

Some characters, like Krillin, can’t do a combo-to-ultimate attack after the Hit-Mira combo because they have gaps in their combos. Another thing that causes their combos to drop seems to be a mechanic that allows the opponent to recover faster out of combos based on the number of hits opponent takes.

While some characters can’t make full use of the Hit-Mira combo, characters like Gotenks make up for that in their own way. His in particular just happens to be a 100% combo in the full video.

The only character who can’t use Hit and Mira to combo at all is Broly, making him the worst character in my eyes. He attacks way too high to properly hit with any support except with Hirudegarn, a character compatible with Broly’s massive size. Even then, he still has no combo-to-ultimate attack.

Piccolo is the second worst character in that regard. He drops his combos far too easily, but even he has a combo-to-ultimate attack. It just has to be performed against the wall with his A-button beam attack. Add Hit and Mira, and the combo is as good as done.

The most difficult part of using support characters to combo is that (for the most part) you cannot use supports while attacking, so the timing has to be precise. It also seems that stronger supports with 5-7 Dragon Power (DP) can’t be used while other support characters are out while quicker and weaker characters with 1-3 (DP) can be used slightly before or slightly after each other.

This is why it seems as if two or more supports are used at once. They’re actually out together, but activated at different times. Activating support characters after a combo is another struggle since I have to let go of the buttons I’m currently pressing to mash the touch screen for the support characters I need at the moment. If I don’t mash, more often, than not, I would drop the combo.

Each character presented a new challenge for the combo video, but for the most part, I managed to get through them all. People might have their favorite flashy combos and some might disagree with me, but this has to be the highlight of the entire video:

You can watch Trunks flop like a fish and the rest of the combo video here:

If there’s an existing shonen anime game that you want me to try making a combo video for, mention it in the comments and I might give it a shot!