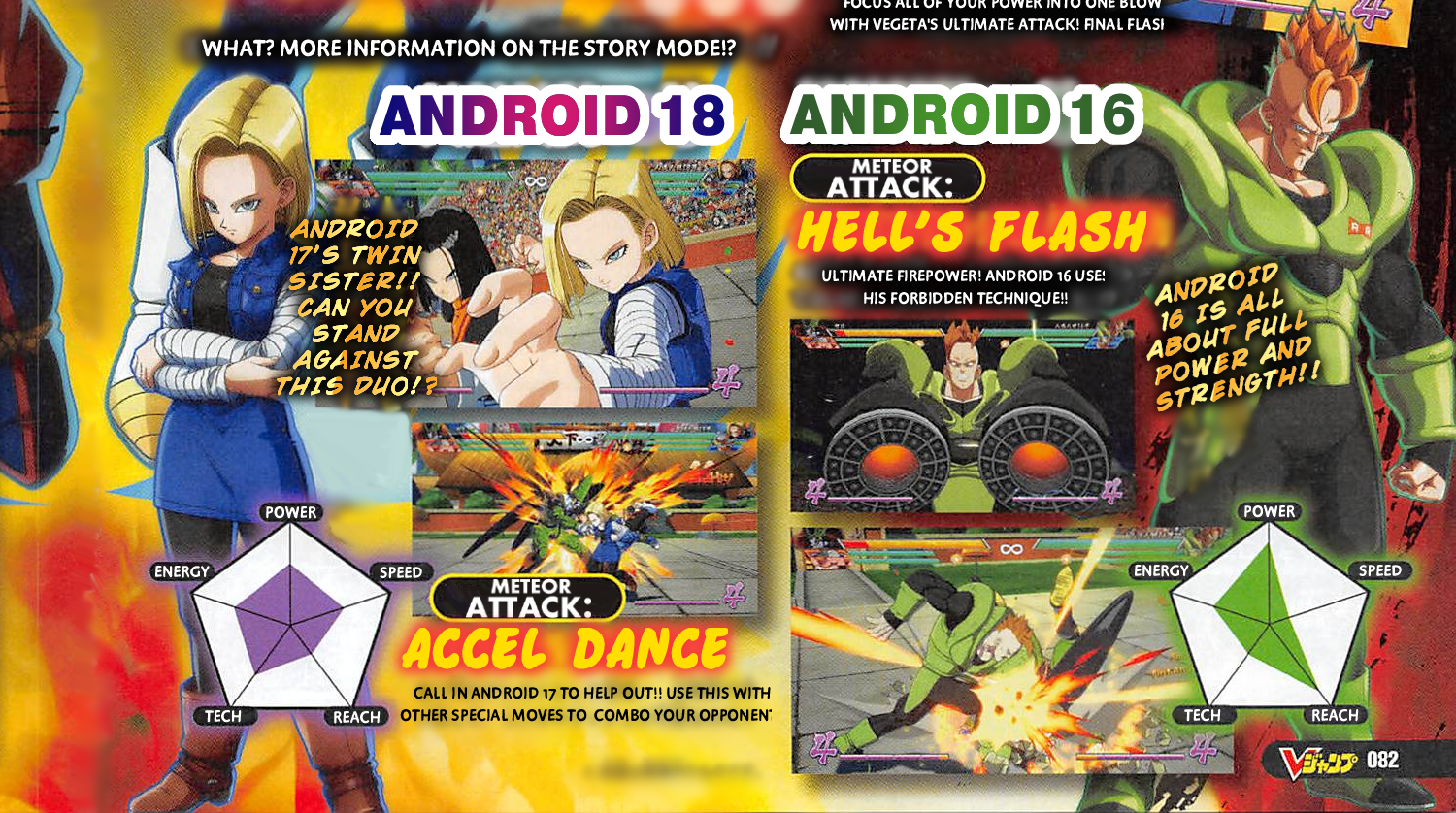 Update: In the article we refer to “Super Androids.” This is a mistranslation. The correct translation is that it is a “super high-animated story mode.” We apologize for any confusion this may have caused.

Those who are anticipating Dragon Ball FighterZ will be pleased to see that V-Jump released a whopping 2-page spread regarding SSGSS Goku, SSGSS Vegeta, Android 18, Android 16, the new story mode, and how online battles will function. This is quite a bit to unpack, so bear with us.

According to the details on SSGSS Goku, he’s an air combo-oriented fighter, but he also requires some training to master. He also has his Kaioken x10 Kamehameha from Dragon Ball Super, which leaves some room to speculate that Hit, the character that Goku first used the move on, could potentially be in the game.

On a similar note, the ground punch barrage that SSGSS Vegeta does in his first screenshot of the scan is performed on Goku Black in Dragon Ball Super, so the same basic speculation applies. As for SSGSS Vegeta’s stats, an interesting thing to note is that his and SSGSS Goku’s speed and power stats are quite high, but essentially opposite of the other character’s stats. Of course, Final Flash has also been revealed as SSGSS Vegeta’s special attack.

Moving on to Android 18, her attacks such as Accel Dance seem to include Android 17, but unfortunately, he himself has not yet been confirmed as a standalone playable character. If you look closely at the screenshot of the three-character team that Android 18 is included in, Android 17 is not pictured in those health bars.

However, Android 16 has been revealed as playable and, according to his stats, emphasizes reach. His special attack has also been revealed to be his iconic Hell’s Flash.

Despite the large images of the SSGSS duo, much of the scan focuses on the androids. In fact, that’s exactly what the game’s story mode is about. A threat called the “Super Androids” are the new villains of the game and for some unknown reason, Android 16 comes back with a role in the story. It is unclear whether or not Androids 16, 17, and 18 will aid or fight the Z-Fighters in the story or if characters like Buu, Frieza, and Cell will have prominent roles in the story. However, the first screenshot of the story mode section seems to feature Z-Fighter clone characters, who might be the “Super Androids” in question. We will update you with more information on the story mode as we receive it.

One of the most exciting parts of the scan is the Party Match section of online mode and how it will function. Up to 6 players can form 3-vs-3 teams to fight each other. Each person controls one character and will need to coordinate and swap out as needed in order to win.