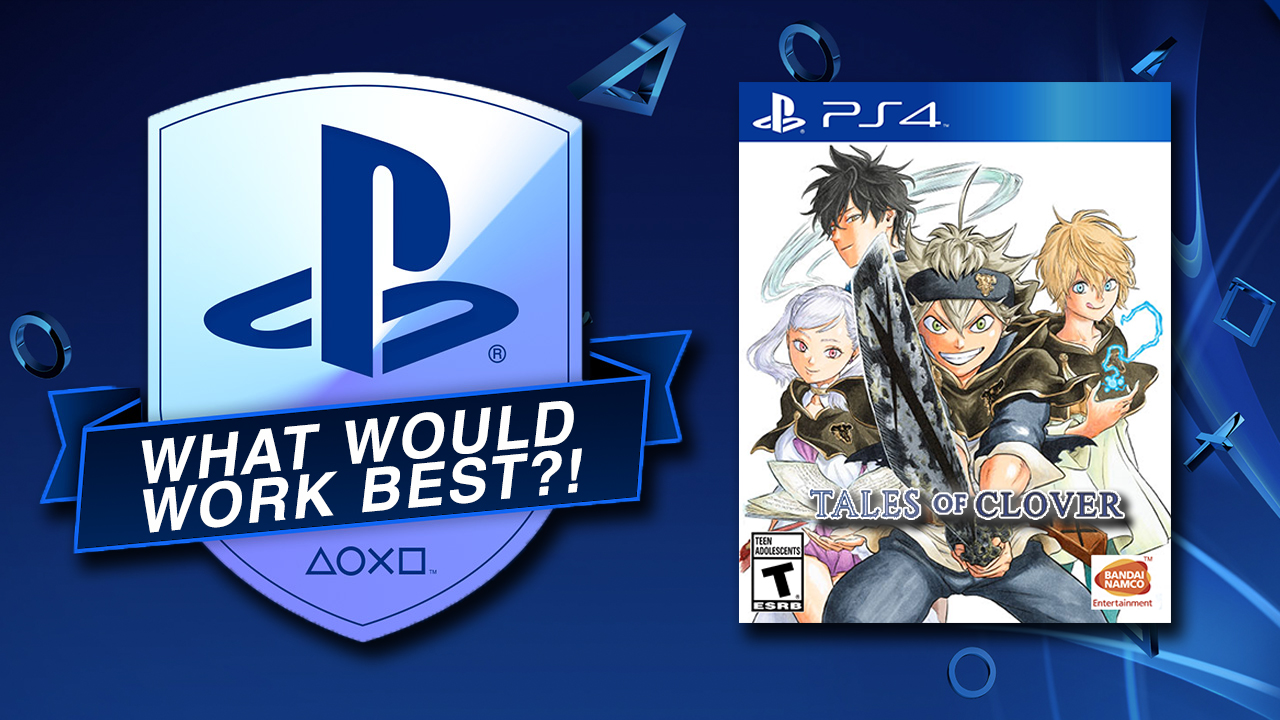 What Would Work Best for a Black Clover Console Game?

With the team behind Bleach heading the project, it honestly has what I liked most about Bleach’s best animated scenes. There’s this cool sort of look that I only really saw in Bleach that I see here, but this video isn’t about the Black Clover anime, even though I probably should do a video on why Black Clover is the new Bleach in many ways, but we’ll get to that sooner or later.

Here I am drinking a white chai tea, recently just discovering the magic of milk and honey (and no not the book that pre-teen girls and middle aged women quote when they wanna be deep) and I realized something. I had an epiphany of sorts, and it got me thinking.

Seven Deadly Sins was a popular anime with a well known studio behind it. As popular as that anime was, it only ended up getting a 3DS game.

My Hero Academia is a popular anime with a well known studio behind it. As massively popular as that anime is, it only ended up getting some obscure 3DS and mobile games.

You see though, Seven Deadly Sins is getting a full Action Adventure Console game, due to the success of the franchise, and I’d assume the sales of the 3DS game helped.

With that logic, I’d assume that My Hero Academia has a game in production right now behind the Bandai Vaults, and that’s a pretty safe assumption to make since Bandai has pretty much always treated the mobile and handheld gaming market as a way to dip their toes into the water.

That is to say, Bandai likes to make games for the 3DS and Mobile markets to see how popular a certain property is before making a PS4, Xbox One, or PC level commitment. They tend to do this with the popular anime of the season pretty much every year, since we’ve seen this with Sword Art, Seven Deadly Sins, My Hero Academia, Food Wars, and I’m sure we’ll see a console One Punch game soon because the fervor behind that means they probably don’t even have to test the waters.

Well, Black Clover is coming up next, and the marketing for it makes it sound like a pretty big deal. The anime industry is touting this as the next big anime, and it seems like it’ll be an ongoing series, much like Bleach and Naruto were. By ongoing, I mean a series that doesn’t end for a year after 24 episodes, even if that isn’t the case though, you can take this away from what we’ve seen so far.

Black Clover is getting a push, because not only is it a popular manga series, but it’s a popular battle manga series with a large cast of characters, and it takes aspects that people love from already existing properties, like magic, spell books that unlock new powers as you grow, and your classic “Shonen Protagonist” that wants to be the kin…wow I really should make that article about Black Clover being the new Bleach.. and Zatch Bell huh?

My point is, it seems more and more likely that we’ll probably see a Black Clover 3DS game at the very least. I mean it makes sense doesn’t it? It doesn’t take a huge jump in logic to assume that Bandai would keep their working business model going, especially since they’re in a very good place right now.

Making a Black Clover game for 3DS just makes sense, but let’s look forward to the game that would likely come after the 3DS game. The console game, but what kind of game would it be?

Well when you ask anyone now days about what kind of game any anime series should get, the quick answer is a fighter, but my dear friends in this article I’m not going to take the easy way out. Nope, I’m actually going to challenge myself and think of an idea for a Black Clover game that isn’t a Fighter, and as fun as it would be to see Asta and Noelle’s team ultimate against some badass enemy from the Diamond Kingdom, let’s take a step back from fighters.

So you have Asta, a main character that swings a big sword that cancels out magic, in a world where everyone else depends on magic. You also have his Black Bull Teammates that have all sorts of devastating magic. What would make a fun game that doesn’t involve having those characters end up in a brawl?

Well, one route we could explore is a “Warriors” or “Musou” type game. For the uninitiated, a Musou is basically any game that you’d associate with Dynasty Warriors.

Games that have titles that end in “Warriors” are almost exclusively musou games like Fire Emblem Warriors, Hyrule Warriors, and Pirate Warriors, but there are games that don’t have Warriors in the title at all that are still musou games like Berserk and the Band of the Hawk, and to a lesser degree Attack on Titan.

A musou fits the Black Clover style a bit, especially as you get further and further into the series, as magic abilities start to take over entire portions of the fields. We have Noelle summoning giant water dragons, Asta sending Getsuga Tensh-I mean Anti-Magic slashes around in his Partial Vizard-I mean Ten Commandmen-I MEAN Partial Demon Form.

The point is, ripping through waves of enemies in some of the cool locations that we see in Black Clover would be pretty fun, especially since a musou game would mean that we’d probably see interesting and crazy moves from characters like Luck, and the other captains.

But is a Musou title the only solution? Well….

I did some digging and found another answer. You see it would be easy to ask for a Action Adventure game similar to the new 7 Deadly Sins title, however I’m going to ask for something a bit different.

Bandai has another property that sells incredibly well, and that property is the Tales Franchise. Tales doesn’t currently have a game announced, but with tales you can always be sure that there’s another game around the corner.

Well, with 2017’s Tales Festival already behind us, I find it weird that we haven’t had even a teaser of what’s to come from the next tales title, like not even the usual Bandai Trademarking 3 or 6 potential tales titles hint that we usually get, and I’m not suggesting this is the case, but let’s go into a hypothetical world for a bit.

What if we could marry Black Clover’s fun cast of characters with adventures that take them to strange lands and different kingdoms, in a world filled with magic & lessons about believing in yourself, overcoming obstacles, and rising above those who look down on you because of your social status, and fuse it with the Tales series, which usually takes on similar themes to the ones that we find in Black Clover.

In any given Tales game, you’ll find a story about a main character with some sort of struggle, that has a party that involves a mix of upbeat characters, shady characters, and badass characters. Well in Black Clover we have the same thing.

Asta has Noelle, and Charmy as his cute and upbeat teammates, Gauche as his Badass teammate, Luck and Magna as his badass teammates, and even Vanessa for the fan service that Tales games usually pack in here and there.

Suddenly, you look at what makes a Tales game work, and you realize that a Black Clover Tales type game would actually be the best fit.

The game would see Asta and his party taking on the Diamond Kingdom, and could take elements from the story, but it could also provide entirely new and original elements as well. What fits best is the fact that the main characters in Tales games tend to be Melee characters in one way or another, but usually they’re Swordsmen. Well the other characters in his party fill the roles pretty well.

They all have the quintessential tales moves.

We have the mage with big water spells that can also create pretty much any manner of constructs with her magic. We have the other close up fighters in the party like Luck and Magna, rushing down opponents along with Asta. We have Gauche, with magic that centers around light beams (you know he’d have Indignation, with a ton of mirrors or something), and reflecting attacks, and you have Vanessa with… boobs. Boobs… AND THE POWER TO CONTROL FATE ITSELF!

As much as I want one more game in the Berseria and Zestiria Tales Series, I’d really like it if they went a different way with things. It would be great if for the first time, the Tales team took an existing property and made what works for Tales, work for it.

Could this happen? Probably not, but should it? Yeah, because what really makes the anime gaming scene flourish is variety, and if every series is just going to get a Fighting Game or Musou game, then we’re going to find outselves back in a place where every game is too similar to that other anime game we like, causing fatigue.

So Bandai if you’re watching, think about it! I’m sure you’d benefit greatly from making your Black Clover console game something like this, rather than a drab fighter that you’d have to continuously balance and make sequels for to keep up fan hype.