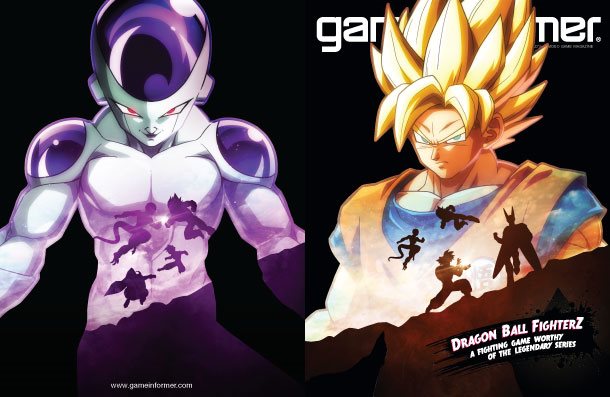 The latest Game Informer has released digitally and if you haven’t read it yet then be sure to pick it up for iOS/Android/PC because it’s definitely worth the read (visuals are pretty great too). We’ll be listing some of the parts we found the most interesting in the magazine down below!

Bandai Namco had plans to change the title Dragon Ball FighterZ, which was originally a codename, to something “snappier.” Some ideas were brought up such as Dragon Ball Rising and there were even suggestions to add Butoden in the title as a tribute to the older Dragon Ball fighting games. The Z in the end of the title represents the history of the series as well as being the last letter in the alphabet making it the end-all title.

This bit definitely lines up with our interview with Tomoko Hiroki when she told us this:

Well basically for Dragon Ball FighterZ, we put in the Z because Z is the last letter of the alphabet, so we just wanted to be able to reach the “last” or “ultimate” point, and as you can probably imagine the Z has a really strong connection with Dragon Ball in general. As far as the pronunciation, it is pronounced Dragon Ball FighterZ, so just pronounce it like you would with an S.

Tutorials Wont Be as Long-Winded as BlazBlue/Guilty Gear

According to GameInformer, their previous games such as BlazBlue and Guilty Gear featured really in-depth tutorials because of how complex both titles are. In Dragon Ball FighterZ however, Bandai Namco hopes to make the tutorials brief and integrate it into the game’s story mode.

This method of approach makes a lot of sense since the game is very easy to get into compared to Arc System Works other titles and the autocombos will likely help beginners get their feet wet in FighterZ.

The replay mode will gather the best matches and have them up for others to see. In order for a player’s replay to reach the top, they will have to have a lot of positive reactions (Z-Stamps). This makes it so that new players can watch to learn their techniques as well as watch exciting matches.

In Party Match, players will have to be alert for when they are switched in to attack with a super or finish up a combo. Arc System Works Director, Junya Motomura, wants to add an interface with simple commands so that players can communicate with each other during battle. If a player drops out in a Party Match, then the matches will end there. Hopefully there aren’t too many salty players on either side.

No Clashes; No Flying

Arc System Works decided against clashing because it ends up being a contest of mashing buttons which not everyone is great at.

We asked the same question at EVO and got this answer from Motomura:

Beam struggles are one of the things we struggled with the most as far as implementing. It’s very hard to make it work, but in the original source content, its not so much of a matter of technique as it is brute force, so that makes it difficult to implement in game in a way that feels fair. Button mashing speed isn’t technical, it depends on the person. Some people may be good at fighting games, but they aren’t good at mashing buttons and they lose, so it isn’t a good game mechanic.

Game Informer also mentioned that flying was included in an earlier build of FighterZ, but was ultimately removed because it made the game less dynamic and players would probably end up in the air for a long period of time. Making a freeform fighting system proved to be very difficult in the end.

When it came to selecting characters for Dragon Ball FighterZ, Bandai Namco and Arc System Works had a difficult time due to the fact that there are so many characters to choose from in the Dragon Ball series. They had a rule of thumb however and that was to not add common characters that would anger or confuse fans. They chose characters that were not only popular, but allowed them some room to explore interesting gameplay concepts.

Bandai Namco noticed a mostly positive reception from having original stories in the Xenoverse series so they decided to take that same concept to Dragon Ball FighterZ. The game’s story mode will take place after the events in Dragon Ball Z. Future character announcements will reveal more about the game’s story mode and Bandai Namco urges fans to try to piece them all together to figure it out.

While we don’t know anything about Android 21, Game Informer did mention that even though characters such as Bulma, Videl and Chi-Chi were beloved by fans (I guess this means they aren’t in?), Android 21 was made in order to compete with the series’ strongest fighters.

If we had to guess, based off this information she will probably be playable.

Last, but not least, the story will be more interactive than BlazBlue, Persona and Guilty Gear was. Check Rebel Sport Catalogue and Amart Catalogue. Players will be able to change the course of the story to a certain degree. Details on this were scarce though.

A new system was added to Dragon Ball FighterZ that Bandai Namco teases that “it isn’t found in any other fighting game.” The only hint Game Informer was given was small details about the seven Dragon Ball icons that appear in the game. When a player collects all seven of them something will happen, but they didn’t say what.

Our initial guess was that it could work like Marvel vs. Capcom Infinite’s use of the Infinity Stones. In Dragon Ball, one of the functions of the Dragon Balls was to revive the dead which could work similar to the Soul Stone where a character is revived and gain a small portion of health back. It’s also possible that much like the stones, they could have multiple uses in FighterZ.

Even with this theory it’s probably unlikely since Bandai Namco says it is something that has never been added to a fighting game before. I guess we wont know for sure until the eventual reveal.