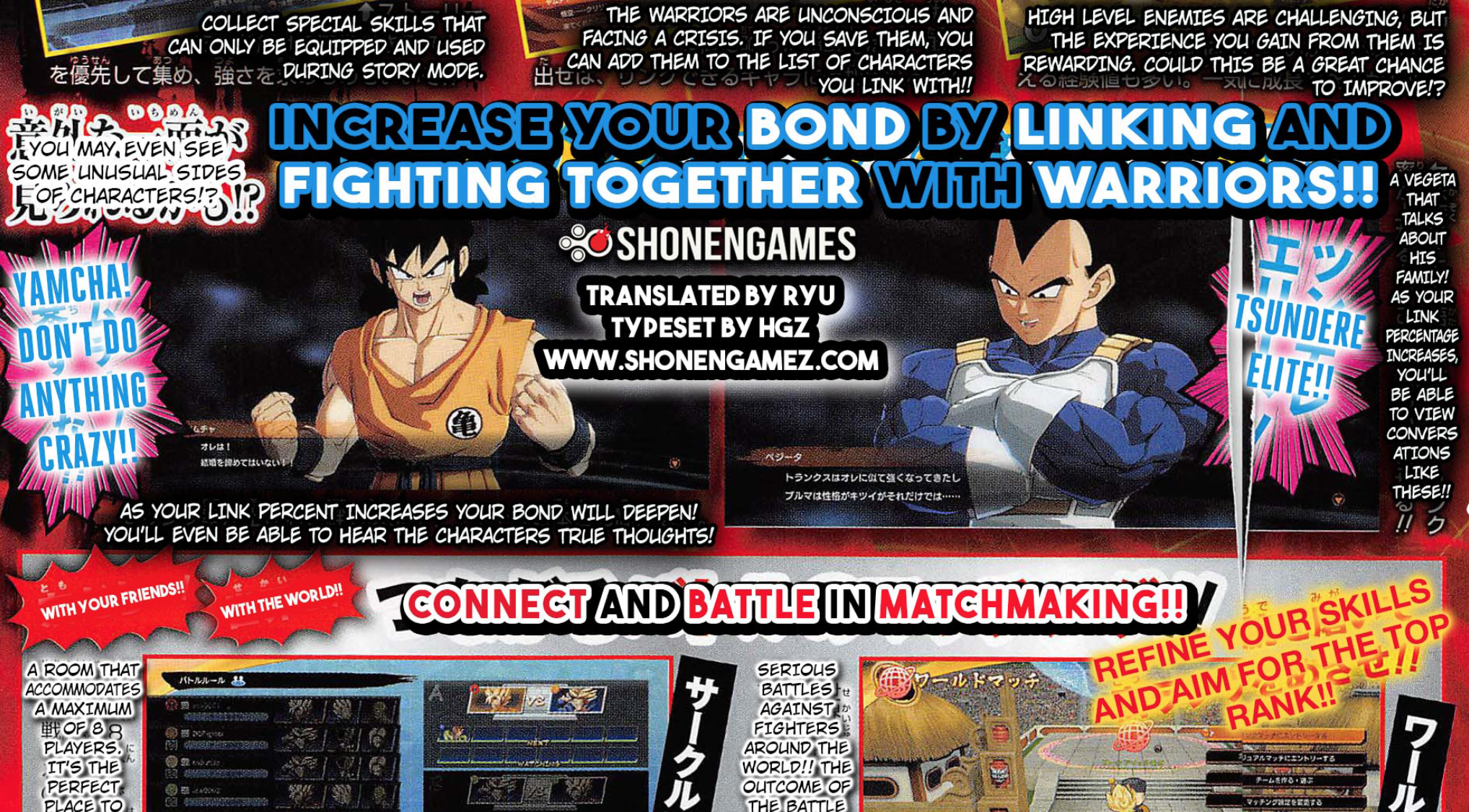 Now that the site is back up, we’ll be updating you guys just in case you aren’t following our twitter!

Yesterday was a HUGE day for scans, especially since V-Jump gave us 6 entire scans for Dragon Ball FighterZ! Right now I’ll break down the 5 story mode scans that haven’t been posted yet!

The first scan which you can see above explains how your character, which is “You” in the real world, wakes up as Goku, and has your soul linked with him! Our Z Warriors start to lose consciousness one by one, and it’s your job to figure out what’s happening to them and fix it!

This scan also fills us on on two Pre-Order bonuses that we weren’t aware of. The first new pre-order bonuses are the Super Saiyan Blue “Aura” Goku and Vegeta Lobby Characters. In the base game, you’ll be able to have Super Saiyan Blue versions of Goku and Vegeta as your Lobby Character for online mode, however if you pre-order, your character will have the SSB Aura, which will help you stand out as only these two characters have their aura!

The third pre-order bonus is a “Girls Z Stamp Set”, which we assume is a set of Z-Stamps that features the women of Dragon Ball. Expect to see Bulma, Launch, Chi-Chi, 18, and more in this set of reaction images for use in the online lobby and replay channel!

Lastly for this scan, it also features the official Box Art!! We’ve cleaned it up and resized it, so here it is below!

Next scan is a doozy as well! First of all, you have the map for the story mode, which reminds us of the map from Budokai 2, which is a beloved title here at Shonen!

In story mode, you’ll progress by taking on the map and fighting enemies in different areas. You gain levels and status, which allow you to do 1 of 3 things! You can focus on unlocking characters to link with in Story mode, gaining skills, which are only usable in Story mode, or leveling up your character as high as possible by just rushing for XP!

If you use a character for a long enough time, you might even learn somethings that are going on in their head! Yamcha and Vegeta are shown below, and while you’re linked with them you can hear their thoughts! Vegeta is the Tsundere Elite, so find out how by linking with him and hearing what he REALLY thinks about his family!!

Lastly on this scan is the Online mode information! This scan features the introduction of Group lobbies, where 8 people can join a lobby and fight eachother, and spectate the people currently fighting. This reminds us most of the Endless Lobbies in the Naruto Storm franchise, and is a very welcome addition to the game. The other online mode is the competitively ranked, World Match!
This is where you’ll take on opponents to raise your global rank!

This next scan gives us an actually look at your character awaking as Goku! Take the truth with your own hands, and figure out what is happening to the characters of DB! This scan also reveals that the story will have 3 scenarios, and it gives us hope for even more!

Scenario 1 is the main story scenario, where you have to stop an evil threat that’s been cloning the Z Warriors, and even the villains and attacking the planet earth!

Scenario 2 will see you linking with.. FRIEZA!? You’ll link with Frieza to witness an “Unbelievable turn of events”, and you’ll likely be learning more about Frieza’s daily life and backstory during this scenario!

Scenario 3 will see you linking with Android 18! In this scenario, you’ll be given access to “Hidden Memories”! These memories are a mystery right now, but it seems like they could have something to do with Android 18’s possible link to Android 21, or they could even have to do with a time before she and 17 killed Gero!

The final scan is just the front page of the spread of scans that you see above! Check Makro Specials and Pick n Pay Specials. It features what we imagine will be the Key Art for the Story mode’s main scenario, however it features the release date of Dragon Ball FighterZ in Japan! FighterZ Releases on February 1st, 2018! Hopefully we see a global release! We’ll let you know as soon as we hear anything!