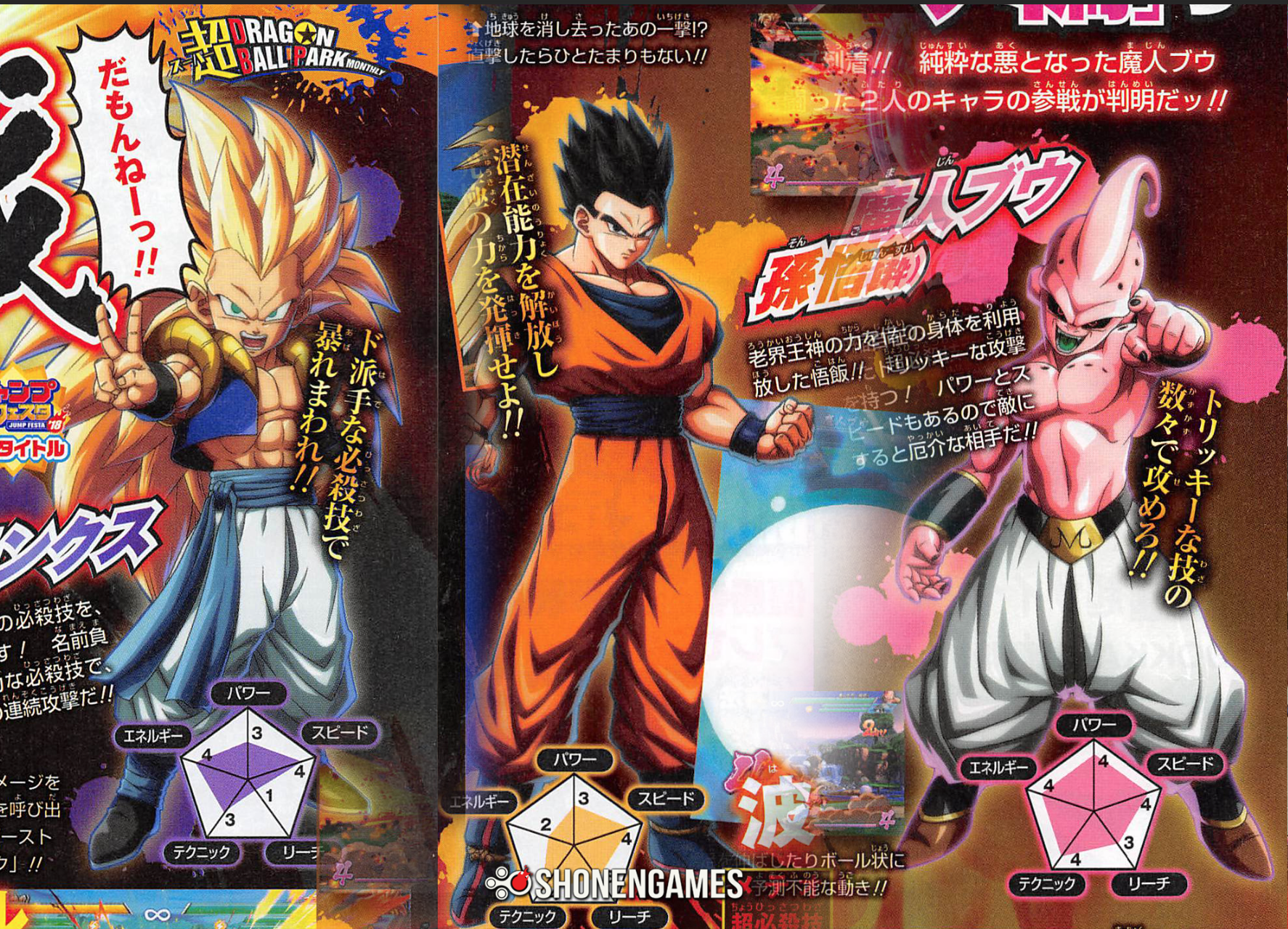 The Buu Saga trio are here! After months of waiting, the website leak has finally paid off, and new versions of Gohan and Buu are here, along with Gotenks, who many fans have considered a lock from the beginning!

Gotenks uses his power Super Saiyan 3 form in his Metero Smash, Ultra Volleyball Attack. He summons galactic donuts around his enemies, and then plays volleyball with their body using your team members as support! Your helper in the Meteor Smash will change depending on who is in your team!

Kid Buu joins as another small fighter, but he sure packs a punch. He has his classic Death Ball, and he looks like he’s going to be a speedy but small character that’ll be a good addition to any team!

Ultimate Gohan arrives and he does seem to have his Ultimate Form mechanics wise! His strength grows with the more Ki that he has stored up in his Ki gauge! Finish enemies off with his Ultimate Kamehameha!

The other announcements in this scan are an Arcade mode, which will allow you to do battle against different AI opponents, and a shop where you’ll be able to buy different color sets for your characters and special titles using money that you earn in-game. 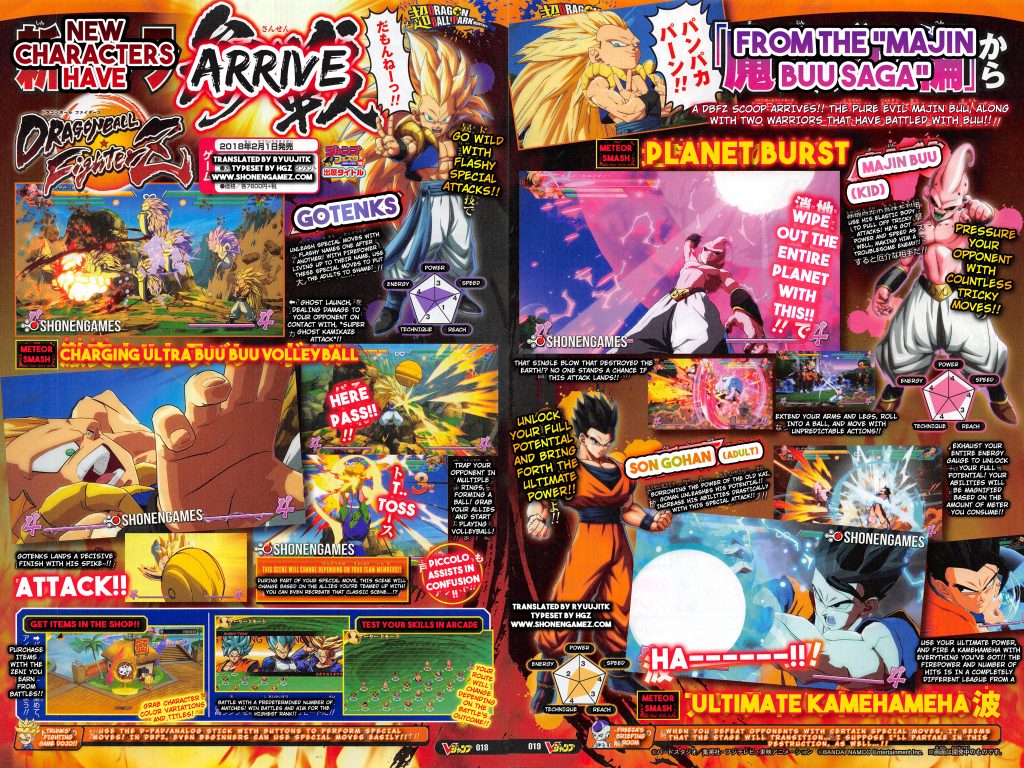 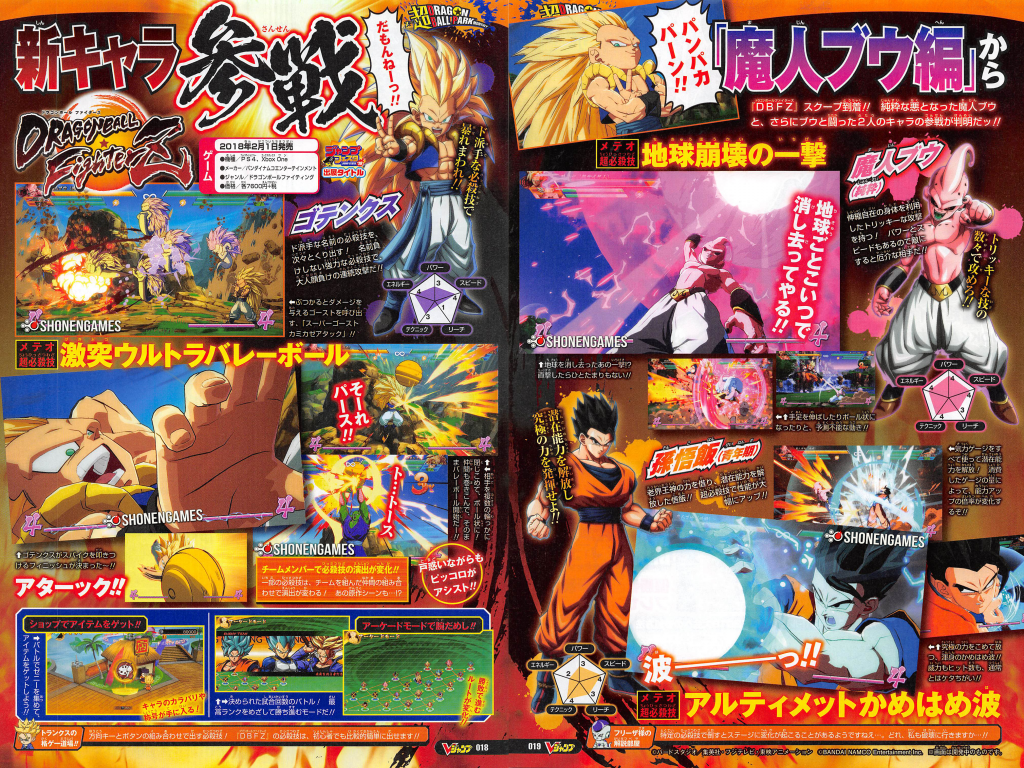 UPDATE: Gematsu has kindly posted the summaries of each character as well as their stats!

Unleash special moves with extremely flashy names one after the next! Continuous attacks that put adults to shame, with powerful special moves that don’t fail to live up to their name. Use the “Super Ghost Kamikaze Attack” to summon ghosts that deal damage upon impact. Use the Meteor special attack “Charging Ultra Buu Buu Volleyball” to imprison your opponent within multiple rings in the shape of a ball. From there, one of your team members will jump in and start playing volleyball. Finish it off with a spike! The scenes for some of Gotenks’ special moves will change depending on the combination of team members.

Kid Buu has tricky attacks that make use of his elastic body. Since he has both power and speed, he can be a troublesome foe. He has unpredictable movements, such as stretching into the shape of a ball. His Meteor special attack is “Planet Burst”—that attack that destroys the earth. The opponent stands no chance once it hits.

Borrowing the power of Old Kai, Gohan unlocked his potential. With special attacks, his abilities have significantly improved. Use all of the Ki Gauge to unlock your potential! Depending on the amount of the Ki Gauge consumed, the magnification of Gohan’s abilities increase will change. Gohan’s Meteor special attack is “Ultimate Kamehameha.” Neither its power or number of hits can be compared to the regular Kamehameha.

Shoutout to Gematsu for their preliminary summary.
Currently Black Friday sale is the leading deal but you can also see Top Toys and Holiday Gift Guides.