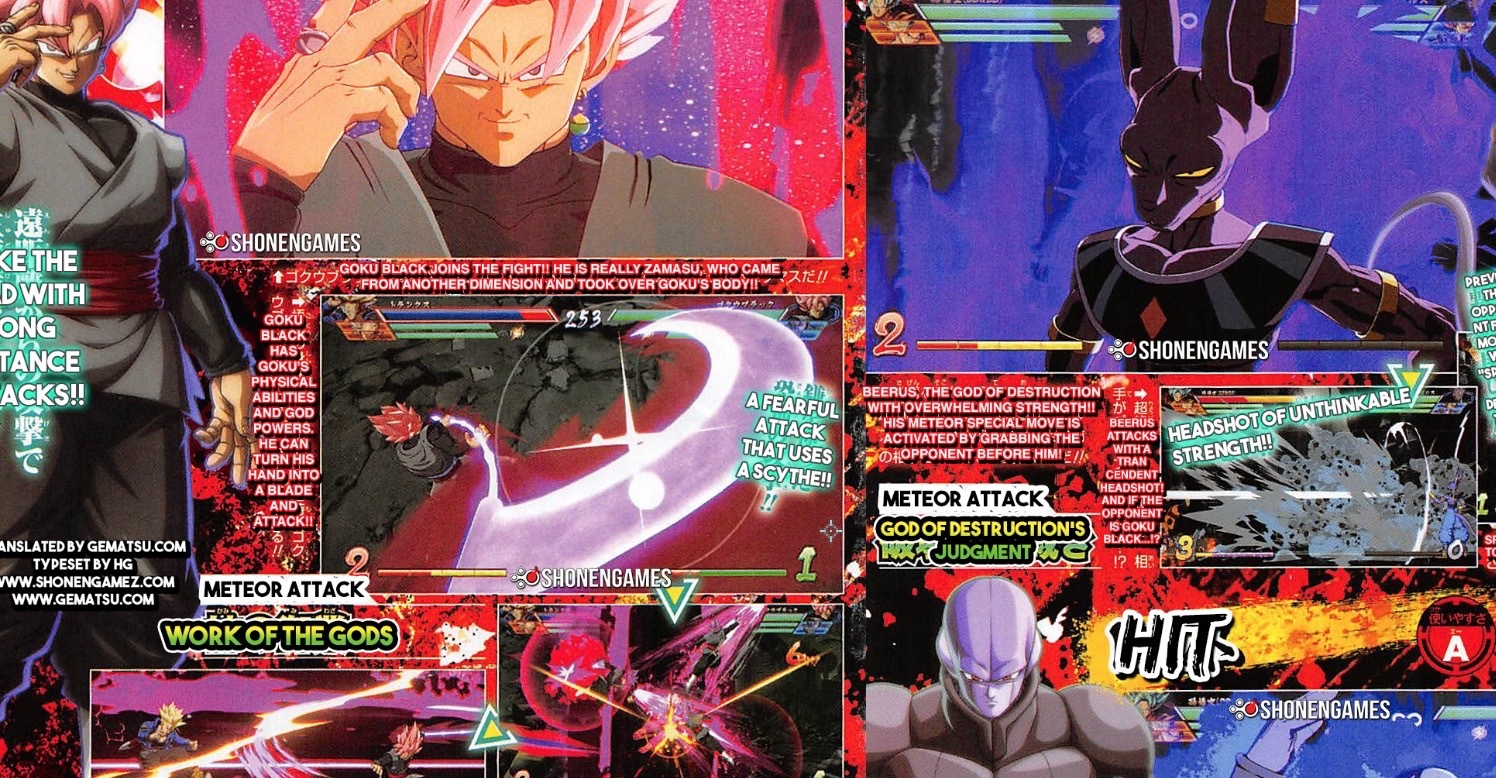 We all assumed that Hit, Goku Black and Beerus were in Dragon Ball FighterZ ever since the error in last month’s V-Jump scans, and now we can see that they’re in! Well the translations are in for the big reveal scans, so let’s dive into them!

Beerus is the most well known God of Destruction, and his power is no joke. With his Spheres of Destruction, Beerus can limit your movements by placing explosive mines throughout the stage. It sounds like you’ll be able to control exactly where these go to some extent. Beerus’ Meteor Smash is “God of Destruction’s Judgement”. This is an attack that starts with a grab. Beerus then shows you exactly how serious a God of Destruction can be by headshotting you with a flick of his finger.

In the scan however, it says “Beerus attacks with a transcendent headshot! And if the opponent is Goku Black…!!”. Since we know that there are special scenes that play under certain conditions, and since the name of the move is referring to a particular scene from Dragon Ball Super, we think that killing Goku Black with this LVL 3, could trigger a short cutscene where Beerus also erases Zamasu with the Hakai technique. (You’ll learn more about Dramatic Finishes soon with our next translation).

Moving on to Hit, Hit has his Timeskip maneuver, and it takes center stage in his moveset. Hit can counter, and set up combos with his Timeskip skill, however the most deadly use of the skill is in his Meteor Smash. His Meteor Smash, “Timeskip/Molotov” stops time, and allows you to attack your opponent with lightning fast combinations. After the time stop ends, your opponent will collapse on the ground and take all of the damage that you gave them during the stopped time, so make sure to go for max damage!

Finally we have Goku Black, the main focus of the scan. Goku Black has Zamasu as a support, however Zamasu is different from Android 17 in Android 18’s moveset. It seems like Zamasu is actually baked into Goku Black’s moveset. From what the scan tells us, it seems like whenever Goku Black goes for the Kamehameha technique, Zamasu will try to grab the opponent to help his other half get the attack off.

Goku Black also has several ridiculous techniques, like his Meteor Smash “Work of the Gods”. In this attack, he hits you with a Ki Blade rush, where he summons clones to attack you from all angles, and he ends it with his scythe. Goku Black’s Super move is a combination attack between Black and Zamasu, where they crush you with a large spirit ball!

Thanks to Gematsu for helping with translations! Check out the scan below for more details!